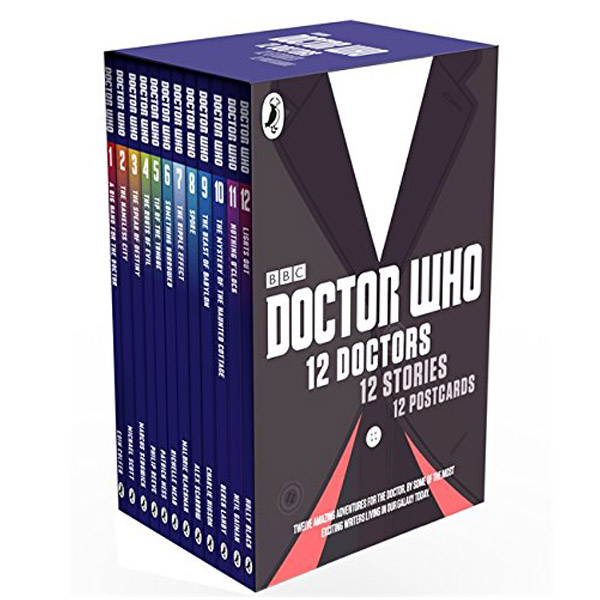 There are more Time Lords than you can shake a sonic screwdriver at in the Doctor Who: 12 Doctors, 12 Stories Slipcase Edition, featuring the twelve main incarnations of everybody’s favorite madman with a box.

The poor War Doctor gets left out yet again but I suppose he probably didn’t have too many different types of adventures since he was busy fighting in the Time War. However, with that one exception, all the Doctor’s previous regenerations are present and accounted for, with twelve authors delivering exciting stories throughout the Doctor’s long life, from his very first form to the current twelfth version, and each novella features a cover that matches the Doctor’s colorful and ever-changing wardrobe. As a special bonus, this edition also comes with twelve exclusive postcards.

The Doctor Who: 12 Doctors, 12 Stories Slipcase Edition will be available November 18, 2014 but it can be pre-ordered now at Amazon.

This Star Wars Comic Box Set in Slipcase is the set you have been waiting for. This set comes with over ten hardcover books and a poster unique to the box set. Many Bothans died to bring you this set. This is going to be […]

Doctor Who ‘We Are All Stories In The End’ Wall Carving

Hit your fellow Whovians right in the feels with the Doctor Who ‘We Are All Stories In The End’ Wall Carving. One of the most dramatic moments of Doctor Who is captured on wood with true Whovian style. Approximately 30″ x 17″, this black walnut […]

Forget the Weeping Angels. The Doctors have the phonebox on the Doctor Who: Lil Doctors – 13s New Threads T-Shirt. Artist TopNotchy has offered up a fun, eye-catching look at the TARDIS and all the various faces of the Doctor, from William Hartnell’s First Doctor […]

The mad man in the box has a new flashy thing, and that means it’s time for the Doctor Who Twelfth Doctor’s Sonic Screwdriver Replica. It’s been a long time coming but patience has finally paid off. First, the Twelfth Doctor was content with using […]