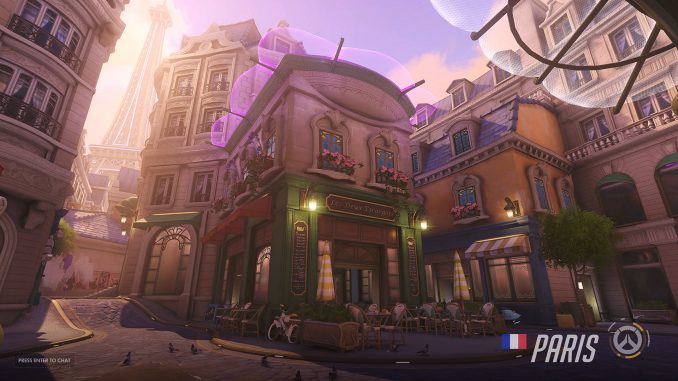 Today Blizzard released Overwatch Patch 1.33.0.1, which includes the New Overwatch Assault Map: Paris. They also released a video introducing the map, which you can see below.

To play the new map, just fire up Overwatch and download the latest patch. Instead of going to Quick Play, where you may have to go through many games before the new Paris map is randomly chosen, go to Arcade, where the Paris map is an option for the next week.

In addition to the new map, the February 19, 2019 Overwatch Patch includes a number of updates and bug fixes, which you can read all about in the Patch Notes.

Paris, an elegant city of art and romance, is the home of our newest Assault map.

Begin your journey at the Cabaret Luna, where the velvety alto voice of preeminent diva Luna charms movie stars, revolutionaries, locals, and tourists alike. After the encore, step outside to see the sights and seize victory. Artisanal shops line the streets as you approach the first point, so duck in to sample a macaron or escape enemy fire. Battle through alleys and corridors before clashing with your foes on the banks of the Seine. Once you establish dominance over your adversaries, make your way to Maison Marat and deliver the coup-de-grâce.

Usually when we think of Paris, visions of groomed poodles, bicycles, small cars, handbags, fine wine, and the city’s famous landmarks tend to invade our mind bubbles. (That is, until Ms. Hilton had to go and ruin things.) If you’re looking for some birthday candles with a little “je ne sais […]