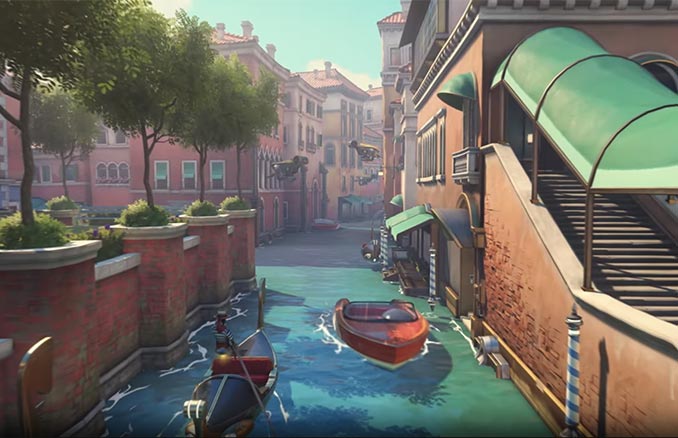 Blizzard released a new patch today that offered the New Overwatch Escort Map: Rialto. Players of this year’s Retribution Event will be somewhat familiar with this map, which is set in Venice Italy. As an escort map you will either have to escort a payload to a series of checkpoints, or defend against the attackers and prevent the payload from reaching the destination before time runs out.

They also released a video to showcase the new Rialto map:

Rialto was home to Talon agent Antonio Bartalotti’s sprawling estate and the backdrop to the infamous “Venice Incident,” a turning point for Overwatch and Talon. The Italian government has taken great steps to preserve Venice, and the results are striking. Tourists visiting this picturesque town can sample the regional cuisine, enjoy a relaxing gondola ride, visit Galleria D’arte Omnica (the local art gallery), or simply take in the sights with a stroll along the canal.

Rialto is currently available in Quick Play, but you may have to wait a while before the map comes up randomly. Fortunately, Blizzard added 6V6 Rialto as an arcade option, so you can jump right in and play it. Rialto isn’t expected to be available in Competitive Play until Season 11.

Blizzard announced there is a New Overwatch Deathmatch Map, Petra, on the way, and released a video so you can preview it. With an interesting setting at an archeological excavation site, Petra boasts majestic views from high vistas, while also containing deep tunnels and twisting […]

We already told you about the Pink Mercy Skin, but there’s another way to support the Breast Cancer Research Foundation in their mission to prevent and cure breast cancer. Buy an Overwatch Pink Mercy Charity Shirt, and Blizzard will donate 100% of the proceeds to […]