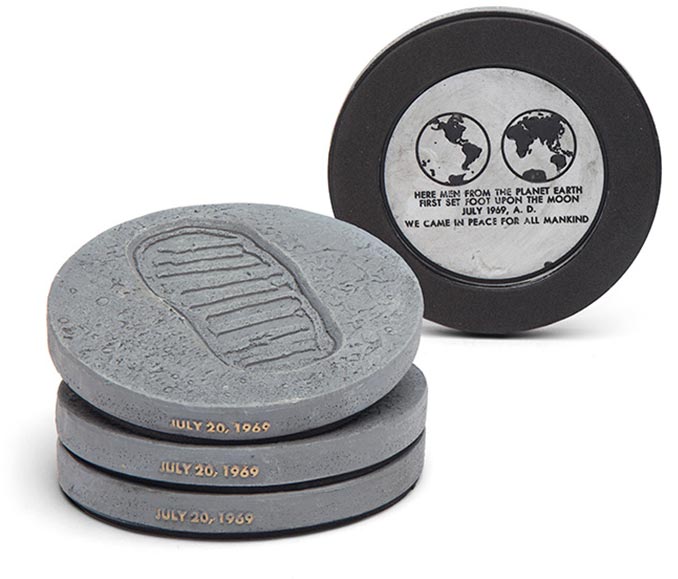 With the dramatic developments from SpaceX, such as the Falcon Heavy launch last month, space exploration is getting exciting again. Although it would probably take a manned mission to Mars to match the thrills of the Space Race, which culminated in the United States landing astronauts on the moon. These NASA Lunar Bootprint Coasters celebrate mankind’s first steps on the moon from July 20, 1969 when mission commander Neil Armstrong and pilot Buzz Aldrin landed on the lunar surface as part of the Apollo 11 mission.

These coasters feature a bootprint, based on the NASA photographs of astronaut bootprints on lunar soil, such as the following close-up photo of Buzz Aldrin’s bootprint on the moon. They have the date Apollo 11 landed on the moon (July 20, 1969) on the side. Graphics on the back represent the plaque the astronauts left on the moon which says, “Here men from the planet Earth first set foot upon the moon. July 1969 A.D. We came in peace for all mankind.”

NASA Lunar Bootprint Coasters are available exclusively at ThinkGeek. They cost $29.99 for a set of four.

NASA fans are going to love this NASA Apollo Capsule Cookie Jar. This ceramic cookie jar is in the shape of an Apollo capsule and it looks amazing. This cookie jar is easy to clean with a resealable rubber gasket. Your cookies have been on […]

Fans of Space exploration are going to love this Bobble Head NASA Astronaut Coin Bank. It will go great with all of your other NASA items and rocket replicas. It stands 8 1/2 in. tall, 6 1/4 in. wide, 5 3/4 in. deep. The head […]