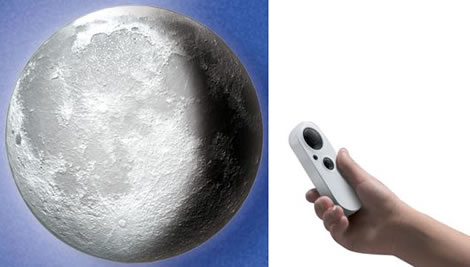 We had a moon phase clock yesterday and some of you might remember the illuminated moon globe that we covered a couple of months ago.

The beautiful Complete Lunar Cycle Illuminated Moon ($25) available at the Hammacher Schlemmer website is kind of like a mix between those two.

This is the wall-mounted illuminated convex replica of the near side of the Moon that cycles through all eight lunar phases, yet accomplishes the transition between each phase smoothly by depicting consecutive nights of the same phase, resulting in a total of 12 different views separated by five-second intervals. In automatic mode, it progresses through the waxing crescent, first quarter, waxing gibbous, full moon, waning gibbous, third quarter, and waning crescent phases before beginning again with the new moon. The raised textured surface faithfully depicts recognizable details such as the Mare Tranquillitatis, site of the Apollo 11 moon landing, and Tycho crater. It only functions in a darkened room and shuts off in 15 minutes if left un attended; phases can be manually advanced with included remote. Moon requires four AA batteries and remote requires two AAA batteries. Ages 6 and up. 10″ Diam. x 21/2″ D. (11/2 lbs.)

With the Galilea Moon Phase Clock ($65) you will not only be able to see what time it is, you will also be able to keep track of the current phase of the moon. A matte black shield revolves around the detailed lunar globe to […]

The Papertronics Lunar Landers DIY Kit is the origami that you have been waiting for. Choose from the following Lunar Landers: Spaceboy, Alien Girl, Tabula Rasa. They make cool accent lights, desk decor, or party lights. They are just plain fun. They have paper electronic […]