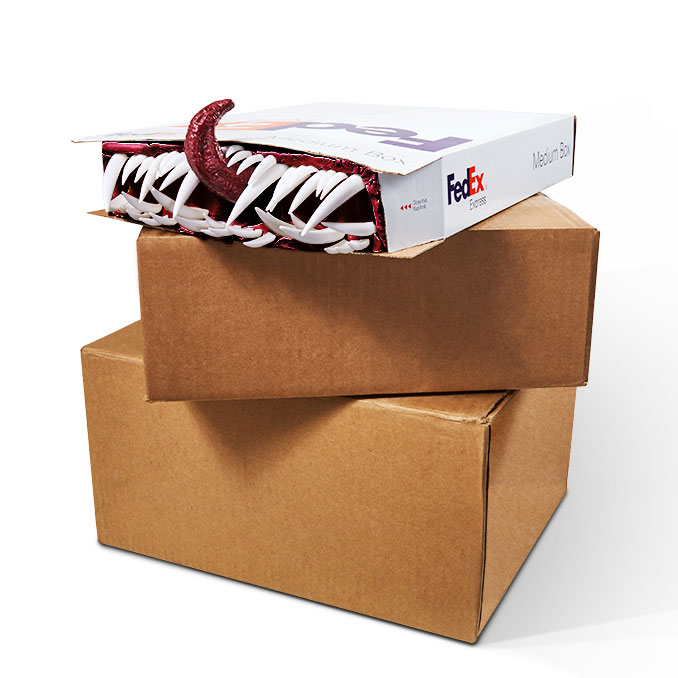 You’ve probably watched the video or at least heard about the NASA engineer that pulled an impressive glitter bomb prank on porch pirates. You don’t have to go through all that trouble to thwart package thieves when you can get this Motion-Controlled Mimic Package instead.

It looks like an ordinary package, but when someone gets close, it comes to life looking like a mimic from Dungeons & Dragons, complete with a ginormous tongue.

Who else is tired of getting packages stolen off their porch? We sure as heck are. And the really frustrating thing is that we keep buying into the trends that are supposed to make things safer, but nothing gets better. We bought the video doorbell and our package thief put on a mask and started waving at us. We tried giving the delivery service keys to our house and the food in the fridge started to disappear. We bought the glitter bomb, and the package thief wiped it off all over our porch as revenge. There’s still glitter there and that was last year. We’re desperate.

Thankfully, we rolled a natural 20 and successfully acquired some mimics from the world of Dungeons & Dragons. Or more accurately, we’ve embraced the concept of mimics as scary creatures and given them a real-world makeover. These Motion-Controlled Mimic Packages look like real packages and can be inconspicuously placed on your porch to mess with hooligans. But whenever someone approaches the mimic to grab it, things will get creepy. The top of the box bursts open and a giant tongue gives them an unwanted surprise. And best of all, you don’t have to worry about any batteries because these mimics are solar powered.

If it were real, the Motion-Controlled Mimic Package would be $29.99 at ThinkGeek. If it were an April Fool’s joke, that would be the thing they are known to do on April 1st.

Roll the dice, use your magic, and call the past into the present with the Dungeons & Dragons T-Shirt. If you were a kid during the 80s, you probably managed to watch at least an episode or two of the animated Dungeons and Dragons… which […]

Monsters and Heroes of the Realms: A Dungeons & Dragons Coloring Book

Monsters and Heroes of the Realms: A Dungeons & Dragons Coloring Book is for RPG fans who like to color. It features 68 illustrations for you to color and it has popular fan favorites like a Beholder and a Mind Flayer. The back includes mini […]

Around New Years is the time when most people take down their Christmas decorations. However, The Nightmare Before Christmas Musical Glitter Globe Train is a decoration you’ll want to display all winter long. Each vintage-style train car is masterfully crafted in exquisite detail with sculpted […]

Today Speakal announced that their new Apple-certified speaker dock, the Speakal Cool iPig Motion-Control Portable Speaker Dock, is available to buy at Amazon.com. We posted about the Cool iPig before, which is a follow-on to the original iPig, but now we have better pictures and […]