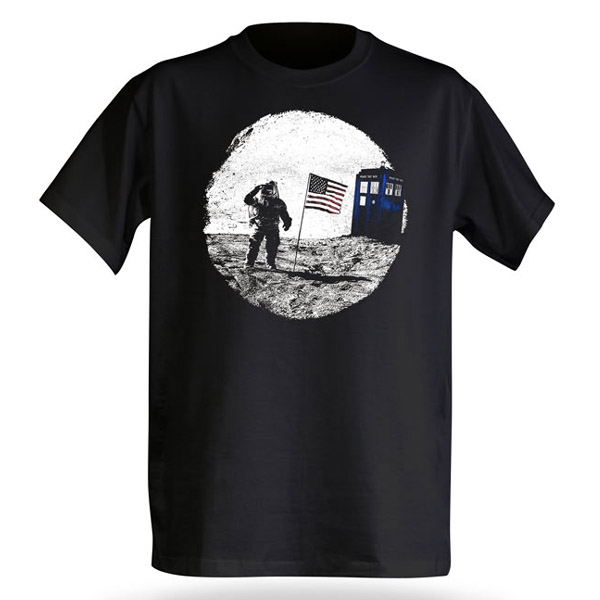 What do you do when you’re the master of time and space? Well, according to this Moon Landing TARDIS Photobomb T-Shirt, you pop up in as many historic locations as possible to make sure you’re remembered for all time.

When NASA Astronaut James Irwin touched down on the moon with the Apollo 15 Lunar Module, he probably didn’t expect to see Doctor Who’s familiar blue phone box, but he took it like a pro and went on about his business, which included a truly out-of-this-world photo op. A (possibly) fictional rendition of that photo appears on this black, 100% cotton t-shirt.

Merge history, fashion, and Doctor Who with the Moon Landing TARDIS Photobomb T-Shirt for $17.99 – 18.99 at ThinkGeek. Isn’t everything better with a time lord added in?

An iconic shirt gets even more iconic with the Four Wolf Moon T-Shirt. If you’ve spent any time at all online then you’ve probably seen the legendary Three Wolf Moon shirt, along with variations that include Rocket Raccoon, Grumpy Cat, and Sam and Dean from […]

The Look Out Schrodinger’s Cat, It’s A Trap! T-Shirt features an adorable representation of everyone’s favorite theoretical physics experiment.  The great Admiral Ackbar is referenced in this shirt with the “it’s a trap” phrase, so this t-shirt packs double the geek punch.   The perfect […]