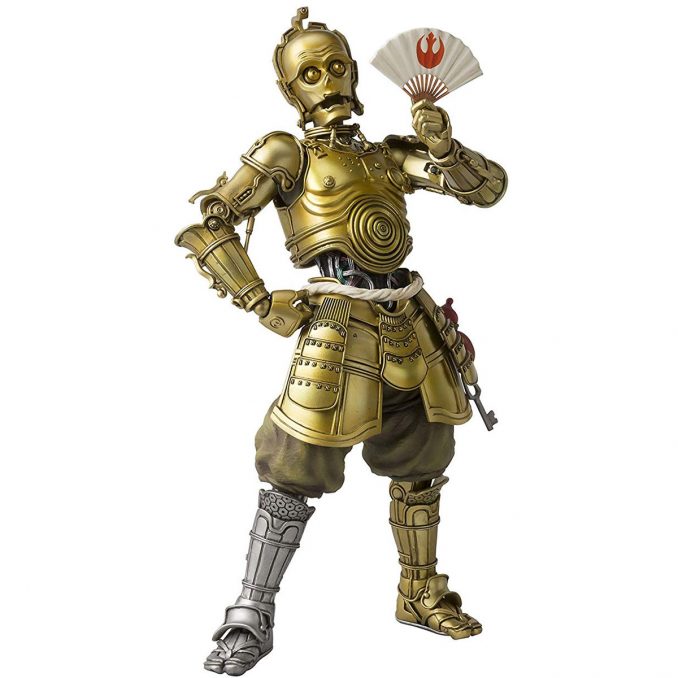 If you’re looking for another amazing Samurai action figure to go with your Darth Vader or Boba Fett, you need this incredible Meisho Movie Realization Samurai C-3PO Action Figure from Bandai Tamashii Nations. The detail of the sculpture is fantastic, due to the work of legendary sculptor Takayuki Takeya. It’s also highly posable, as even the mouth and eyes are movable. Plus, it comes with a fan accessory as well as an extra set of hands to recreate different poses.

Let’s face it: of all the awesome characters in the Star Wars universe, C-3PO is not the most combat-ready. But the Samurai C-3PO Action Figure from the Meisho Movie Realization series of figures from Bandai Tamashii Nations will utterly transform your image of the famous gold droid! This action figure has movable mouth and eyes, and comes with feudal-style warrior armor, topknot, fan, and extra pair of hands. Like any true wandering samurai, the practical C-3PO also has a gourd water carrier and a rope around his waist. George Lucas drew much of his inspiration for the original Star Wars from elements of Japanese culture and this “clockwork translation automaton” (Honyaku Karakuri) version of C-3PO repays his tribute by reimagining the droid in a uniquely Japanese way, courtesy of the design vision of legendary sculptor Takayuki Takeya.

This Samurai C-3PO Action Figure is available now at Japan Trend Shop, where is costs JPY 10,500 / $95. It is coming soon to Entertainment Earth and Amazon and can be pre-ordered now.