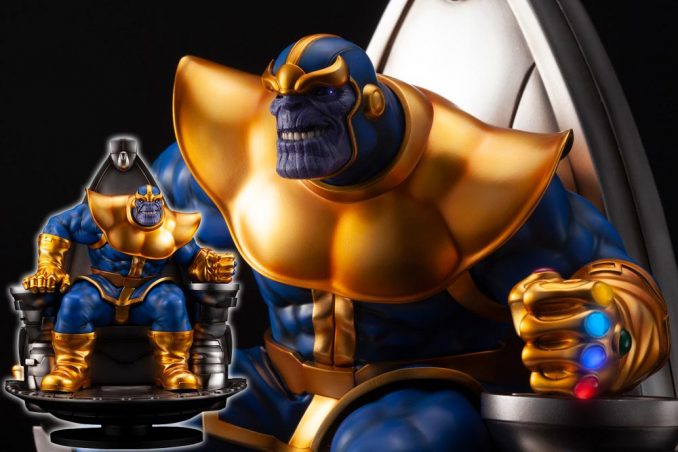 If the Mad Titan is one of your favorite characters, you have to see this incredible Marvel Universe Thanos on Space Throne Fine Art Statue from Kotobukiya. It’s a 1/6 scale figure that captures every detail, and Thanos’ fierce essence, incredibly well. It’s not just the cold look on his face, the power and intensity of his posture, and the clenched fist that make him look so fearsome, but the very fact that he is wielding the Infinity Gauntly as well.

Measuring about 17.5″ tall, this statue of Thanos sitting on his Space Throne looks amazing in the pictures. However, it should look even better in person as each of Thanos’ eyes illuminates with microfiber LEDs to give his menacing glare even more intensity. An LED inside the Infinity Gauntly also assures that each of the six Infinity Gems shines brightly.

Revel at the sight of Thanos with the Infinity Gauntlet as he sits upon his throne. The six Infinity Gems shine brightly with an LED light inside the Infinity Gauntlet, and his cold and eerie personality can be seen in his facial expression. But it’s his eyes that bring this statue to life. Microfiber LEDs illuminate each of Thanos’ eyes, giving the impression that he’s glaring at you, regardless of the angle from which you choose to view him! The realism in the sculpt, from the way he looks down at inferior beings from atop his throne to the optical illusion of his eyes always keeping watch, is such that this statue gives off an evil and almost frightening vibe. The buttons to turn on and off the LED lights inside Thanos’ eyes and the Infinity Gems are inside of the statue and can be accessed by removing the Gauntlet and head. Also, don’t miss the revamped Fine Art package design. The Marvel Universe Thanos on Space Throne Fine Art 1:6 Scale Statue measures roughly 17 1/2-inches tall!

This Thanos on Space Throne Fine Art Statue is available to pre-order at Entertainment Earth for $449.99. It is expected to ship in April 2020. You can also find it at Sideshow.