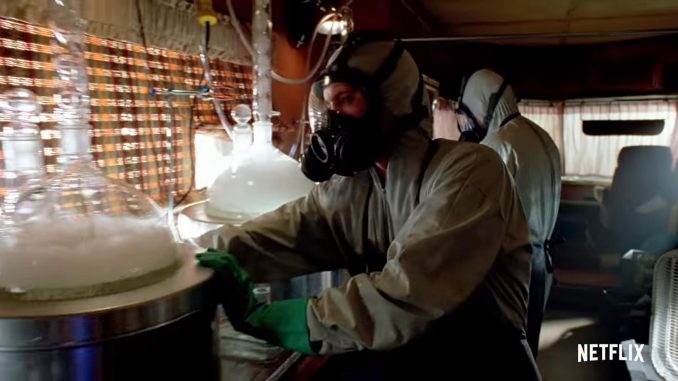 If you’re a fan of the hit AMC TV series Breaking Bad, or the music of Chloe X Halle, you’ll want to check out the El Camino: A Breaking Bad Movie “Enchanted” Trailer.

As you know if you saw the Announcement Trailer, a Breaking Bad movie called El Camino is coming to Netflix on October 11, 2019. It will feature the story of Jesse Pinkman after he escaped Jack and his gang, as he goes on the run from the police and deals with his own inner turmoil. It is written and directed by Vince Gilligan and stars Aaron Paul as Jesse Pinkman.

“Living is a dream…”

Catch up on Jesse’s journey.

If you haven’t seen Breaking Bad yet, or want to watch it again, all episodes are currently available for streaming on Netflix.

Breaking Bad is one of the highest-rated television series of all time, so it is no doubt many will be excited to see the El Camino: A Breaking Bad Movie Announcement Trailer. Not only does it tease the new movie, but it also provides the […]

I don’t know about you, but I love Breaking Bad. One of the best shows ever. And if you like Walter White, you can now have this Breaking Bad Heisenberg Plush to cuddle with at night and experience the softer side of Walt. It’s Bryan […]

Celebrate your love of Breaking Bad with these cool Breaking Bad iPhone Cases. You don’t have to be Walter White to afford one either. They are compatible with iPhone 5/5S and you can choose from Cracked or Heisenberg Sketch styles. These full-color, high-quality designs won’t […]

This Breaking Bad RV Incense Burner will bring back memories of the hit show. You will swear that a miniature Walt and Jessie are inside cooking. It uses cone incense and smoke comes out of vent on top of van. It makes a great gift […]

This Breaking Bad 2014 Wall Calendar will help you keep track of the date with your two best meth making friends, Walt and Jesse. This 16 month wall calendar has pictures from the hit TV show, so that you never have to be without Breaking […]

Some TV logos are instantly recognizable, like the one from the Breaking Bad intro. And if you are a fan of the hit show, you will definitely want this Breaking Bad Logo 12-Inch Plush Pillow Set. Now you can add some Breaking Bad style to […]

Who could forget the pink teddy bear from Breaking Bad. He was a recurring motif in the show. Almost a part of the cast. Now you can have his eye with you always. The Pink Teddy Bear Eye Breaking Bad Keychain has its eye on […]

Fans of a certain drug lord will love this Breaking Bad Heisenberg Inside T-Shirt, revealing both sides of the man who took a unique approach to dealing with a cancer diagnosis. You’ve just been diagnosed with lung cancer and want to make some quick cash […]

Walt and Jesse burn through a lot of cash with their business, so you know that they would buy this cool Breaking Bad Money Clip Set. With this set you get 2 Breaking Bad money clips. They both feature Walter White’s alter-ego Heisenberg. If you […]