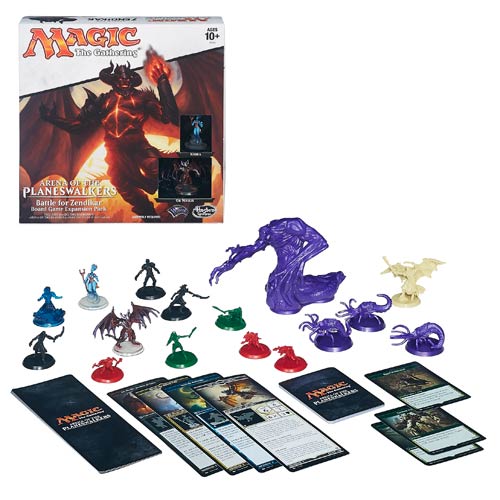 The Magic The Gathering Arena of the Planeswalkers Game Battle for Zendikar Expansion adds a new dimension of play to the core game with two all-new Planeswalkers.

This expansion features 2 additional powerful Planeswalkers: Kiora and Ob Nixilis. It also introduces additional creatures, spell cards, and the first-ever hero creature: the world-eating Eldrazi Ruiner. You also get a special battlefield scenario for epic showdowns where players can team up against the single player controlling the Eldrazi Ruiner.

It makes a great gift for fans of the game. Only $25.99 from Entertainment Earth. Pre-order it now for January.

Magic The Gathering Arena of the Planeswalkers Game

Do you have what it takes to survive? The Worst Case Scenario Survival Game isn’t a game for pessimists, despite how its name sounds. In fact, it’s sort of an educational board game because it presents you with questions on how to deal with worst […]

The Munchkin Deadpool Just Deadpool Expansion Pack is all about Deadpool and nothing but Deadpool. So help me Deadpool. This expansion Pack adds katanas, kittens, explosions and a whole lot more to the Munchkin: X-Men Edition. You get 35 more cards that bring Marvel’s anti-hero […]

Doctor Who might be the madman in the box but it’s still irritating to Whovians when people don’t really know what ‘the box’ is. Say TARDIS to them and you see their eyes glaze over. The TARDIS-Shaped Expansion Shirt breaks it down in a very […]

Nanobot Battle Arena is a tile-based tabletop strategy game for 2-8 players. The idea is to form the longest chain of NanoBots to win the game. You build the longest nano-bot chain while defending your own and working against the other person’s. Sounds easy, but […]