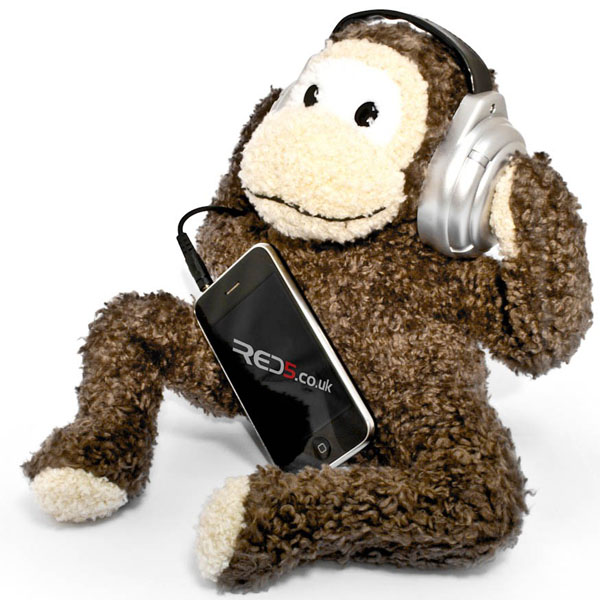 Remember those Windows screensavers that featured some dancing naked babies who would groove their way all across the screen until you gave the mouse a nudge or resumed working? I wasn’t a huge fan of those because I personally found the babies a bit creepy. But one thing I can’t deny though, is that dancing baby sure made me want to bust a move or two whenever I’d see it dancing up a storm. And while the Magic Music Monkey won’t exactly make you want to do your thing on the dance floor, it will groove along with you and your music.

The Magic Music Monkey speaker makes a brilliant companion for your computer or mp3 player – watch as he plays and grooves to your music! Simply plug him into the headphone port of your device with the supplied cable, power him up and he’ll start dancing. He’s definitely the most entertaining speaker we’ve seen and he’s sure to be a hit with the kids (both young and old)!

Remember the Hip Hop Pet Loudspeaker that would dance to the beat of your music while it played it out loud? Or the Magic Music Monkey that makes for a more adorable dancing partner? If you’re neither a robotic dog nor monkey person, then you […]

if you don’t like the soft touch of the Plush Monkey USB Speakers, here’s an alternative that might suit you better. Or, use them together with the Monkey USB Webcam with Pen Holder. Features: Recharged by USB Built-in rechargeable Lithium Ion battery Simple, just plug-in, […]

Play music anywhere with these Magic Music Gloves. If your friends have the electric guitar t-shirts or the synthesizer t-shirt, you can join their band with these music gloves. With these gloves you can play the piano, violin, or guitar anywhere, just by touching something. […]

The guys over at ThinkGeek have been churning out great products since the beginning of time, and it’s about time they created a product that rewarded their mascot.  Timmy The Monkey is the adorable face that greets you when you jump onto their website, and […]

Look! Up in the sky! It’s a bird, it’s a plane, it’s… a Screaming Slingshot Monkey howling through the air as he flies for truth and justice, or maybe just a laugh or two. Admit it. When you get bored, you dream of livening things […]