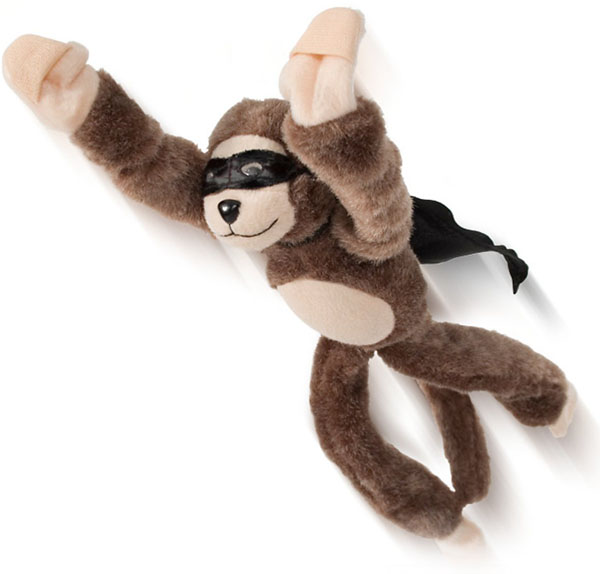 Look! Up in the sky! It’s a bird, it’s a plane, it’s… a Screaming Slingshot Monkey howling through the air as he flies for truth and justice, or maybe just a laugh or two.

Admit it. When you get bored, you dream of livening things up by chucking a monkey through the air. This hilarious little boredom-breaker was made for you. Just slip your fingers into the custom pockets in the monkey’s hands, pull him back to stretch his super-stretchy arms, and then let go to see the furry little guy fly up to fifty feet away. 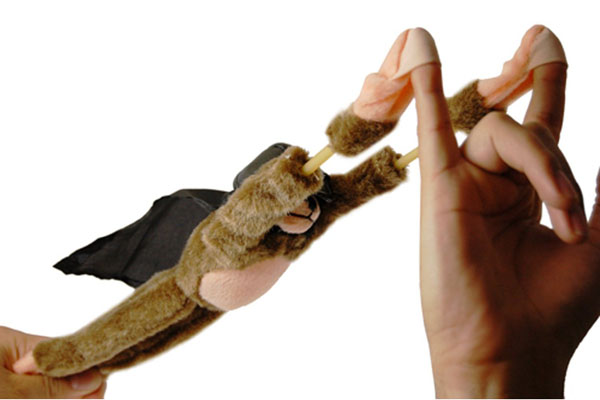 No self-respecting super monkey would fly through the air without a disguise so this flight-friendly simian wears a cape and a mask to hide his true identity. After all, how many flying monkeys can there be in your neck of the woods? Of course, no self-respecting super monkey would probably scream as he soars through the air, which is exactly what this dude does, thanks to the chip that activates when he’s airborne. You think a flying monkey is hilarious? A screaming one will have you rolling on the floor in fits of laughter.

Boredom will never get the best of you again with the Screaming Slingshot Monkey around to break up the monotony. You can get it for $8.95 at Stupid.com and from $2.80 at Amazon.com.

Sock Monkeys are a classic toy that desperately needs to be updated. Why? Because they don’t cause enough mayhem. This Screaming Flying Sock Monkey updates this old cute gem for modern times. He’s a cute monkey and also a weapon. This 12″ Sock Monkey is […]

What’s better than engaging in water balloon warfare? Owning water balloon weaponry and fighting as teams. Recently, there was the Aqua Force Crossbow and the Lacrosse-style 2-Pk. Water Balloon Launcher, and now we bring you the Kaos Catapult 3-Person Water Balloon Slingshot. There is no “i” […]

If you’re a lover of tea, then you must simply try out this pack of Monkey Picked Tea. When we say “monkey picked,” we really mean that they were picked by trained monkeys from a remote mountain region in China. There was a legend that […]

If you get a thrill out of the idea of being bounced around, narrowly avoiding collisions with your friends, then the Human Slingshot is the activity you’ve probably been searching for. When it comes to learning how to use the Slingshot, things couldn’t be simpler […]

We all know monkeys love bananas, and this Mad Monkey here is no exception. Its not-too-distant relative, the Mimicking Monkey, is a much calmer member of the monkey species, and I’m sure you’ll come to the same conclusion once you see how mad this monkey […]