The Luigi Death Stare T-Shirt captures a moment from Mario Kart 8 that reveals Luigi might not be as happy-go-lucky as his brother, Mario.

If you’re into gaming, you’ve probably seen the moment; that moment when Luigi tosses a green shell and takes Waluigi out of the race… and then, IT happens. Luigi goes zooming by and he stares at Waluigi in such a way that would make someone call the cops if they were really stared at in such a fashion. It’s a look that says you messed with the wrong person, a look that says what just happened is child’s play and that things can get much worse if you become a problem. When someone driving down the road gives you that look, you slow down and let them take the lead, regardless of whether or not they have a green shell to throw at you. 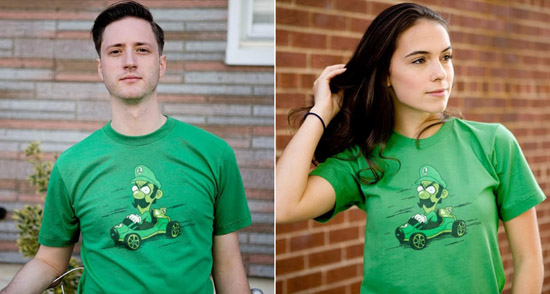 The Luigi Death Stare T-Shirt is available for $20 at BustedTees.

Remember the Desktop Golf toy from last month? Now you don’t have to be alone on the course anymore. Bring out the gear and play the game together with no other than Mario and Luigi.

Now you can get a pair of slippers to go with your Mario scarf and costume. These fun and geeky Super Mario Brothers slippers are shaped like the heads of Luigi and Mario. The soft and fluffy footwear measure 10(L) x 5(W) inches, and they […]

GeekAlerts has shown you cool K’Nex before with the K’NEX Mario Kart Wii Building Set, but here’s a different track for fans to experience Mario Kart on. The K’Nex Mario and Luigi Starting Line will allow you to build your karts, piece the track together and […]

If you don’t like the thought of running around with Mr. Vader’s head filled with candy for Halloween, then here’s a chance to show the world some good ol’ video game love instead.