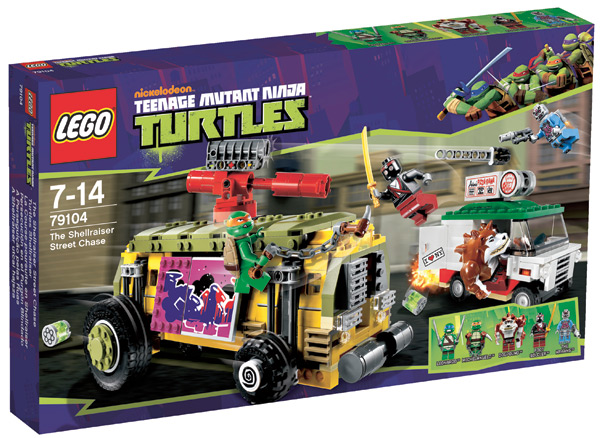 Winter is coming and that means cold weather, Halloween and holiday shopping. This holiday season LEGO is sure to be the hot item on everyone’s list with their recent LEGO 2012 Star Wars Advent Calendar, LEGO Haunted House Set and other LEGO Monster Fighters Sets. And adding to the excitment, LEGO just announced a LEGO Teenage Mutant Ninja Turtles Set called The Shellraiser Street Chase 79104.

The set was revealed today at Comic-Con New York and the details are limited, but we do have a few pictures. It looks like the set will include 620 pieces, 2 vehicles, five minifigures: Leonardo, Michelangelo, Dogpound, a Foot Soldier, Kraang Droid and the ever-important skateboard…Cowabunga dude!

Look for the set to retail for $59.99 at the LEGO Shop and retailers like Amazon.com.

Experience Monopoly in a whole new way with Monopoly: Teenage Mutant Ninja Turtles Edition. Turtle power! This fun version of the classic game features 22 locations from throughout the Nickelodeon cartoon series and includes 6 custom tokens based on characters and items in the show. […]