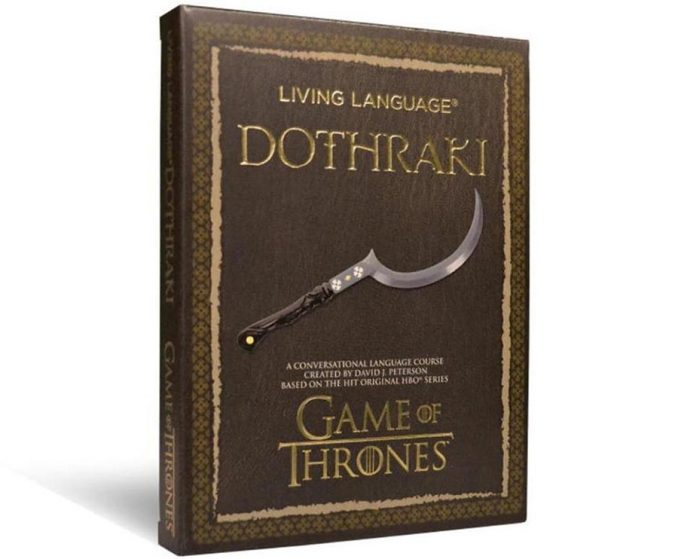 You may have heard of people that can speak Klingon, but do you know anyone that can speak Dothraki? You can be the one with the Learn the Dothraki Language from Game of Thrones Book. This book is written by David J. Peterson, the very person that developed the language for the HBO series.

Loaded with a 128-page language guide along with a one-hour audio CD, Living Language Dothraki gives you the vocabulary and grammar necessary to have a complete conversation in Dothraki. There are over 200 words and phrases, along with cultural notes, grammar explanations, and much more. It even has words never before written in George R.R. Martin’s A Song of Ice and Fire series or spoken in the HBO Game of Thrones TV series.

Fans of the hit HBO series Game of Thrones can now learn the Dothraki language. Written by David J. Peterson, who developed the language for the HBO series, Living Language Dothraki will arm you with enough vocabulary and grammar to have a complete conversation in Dothraki. Me nem nesa!*

The course includes a 128-page language guide and a one-hour audio CD featuring over 200 words and phrases, grammar explanations, cultural notes, a dialogue, and exercises for reinforcement. Containing words never before heard on HBO’s Game of Thrones or seen in George R.R. Martin’s A Song of Ice and Fire series, this course is the ultimate Dothraki guide.

Buy Living Language Dothraki for $19.99 direct from the HBO Shop. You can also find it at Barnes & Noble and Amazon.