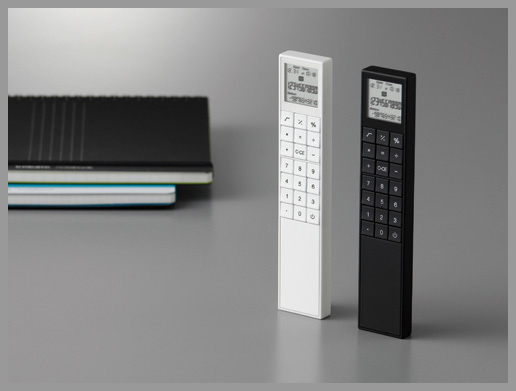 Tatsuya Matsui is more widely known for his designs in robotics but he has foraged into the world of office supplies with the Kokuyo X-ViZ Calculator. Don’t be fooled into thinking that this is actually a television remote control in hiding, because it’s not.

There are a million other calculators out there and some can probably out-perform the X-ViZ, but what makes this gadget so different? For one, it was designed to be used with one hand only; hence, it’s ultra slim shape and sleek form.

The Kokuyo X-ViZ comes in classic black and basic white, so take your pick. Unfortunately, they will only be released in Japan but you can contact Rinkya or Flutterscape ahead of time if you want to order one. They are priced at ¥5,250 ($64) so they aren’t exactly cheap. But if you’re a lover of calculators or all things quirky, then the X-ViZ is probably worth every cent.

When you’re number crunching with a calculator, trying to figure out what the damage is after splurging on a big vacation to Disney or after purchasing too many gizmos seen on GeekAlerts, it’s usually no laughing matter. That’s why some wise guy has invented a calculator […]

Recently I reviewed the X-Doria Defense 360, and today I take a look at another product from this same company in this hands-on X-Doria Engage Form iPhone 4/4S Case Review. The woven shape of the Engage Form case, which is available in either black or […]

I yearn for the day when we can finally stop filling up our gas tanks with, well, gas and start using more environment-friendly safe alternatives as fuel, like water. We may have to wait a few more years (or decades) for that to actually come […]

Yes, those popular Transformers robots sure come in all shapes and sizes.

Crunching numbers need not be boring, especially if you’ve got the Brick Calculator around. Most people already know what LEGO building blocks are. Just imagine a gigantic piece of LEGO that’s been equipped with a calculator, and that’s basically what you have here in your […]

This might not be the most comfortable mousepad out there, but on the other hand, it will provide you with a soft blue light, a 10 digit calculator, and a 3-port USB hub.

Way back in the day, calculators weren’t as simple as they are now. Relive those days with this Retro Calculator. It will look great on your desk as it crunches numbers. This Retro Calculator features a digital display, number memory storage and solar power technology, […]