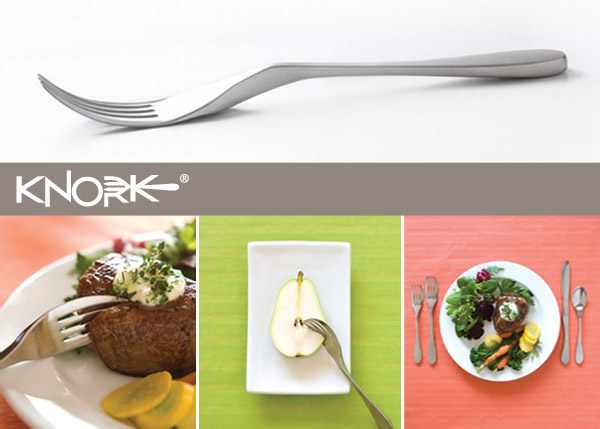 The concept behind sporks was clever. They’ve been around for quite a while now, so I’m sure you’re more or less familiar with the spoony and forky nature of sporks. However, they were a pain to use, mainly because you couldn’t scoop liquids up nor use the fork portion that well. Following the same concept, but executed much better is the Knork.

If you haven’t guessed from its name already, the knork is a knife and a fork, combined into one. The beveled surface on one side of the fork lets you cut through fruit, vegetables, and even meat with ease. The cool thing is that it doesn’t cut the inside of your mouth when you’re using the knork as a fork. I don’t know how they do that, but it’s pretty cool, right?

The Knork is available in sets of four from Amazon for $22.99.

With the HAPIfork Bluetooth-Enabled Smart Fork, your silverware is now smart enough to help you lose weight. When it’s time to stuff our faces, we usually don’t pay attention to how long it took to eat or how many times we lifted our food-laden fork […]

Here is a tool for the drifter/adventurer who wants to always be ready to dine at a moments notice. The Hobo Knife Fork/Knife Combo Tool is a nice update to an old classic. It gives you a fork and knife in one tool. It features […]

Getting young kids to eat their dinner is a full time job. Luckily we have some things to help, like the Illuminated Jetbib Feeding System and now the Air Fork One fork.

Why do people say they’re broken hearted when they go through a breakup, when it’s not the heart but the hypothalamus that regulates this stuff? After all, it’s in this part of the brain where romantic love feelings begin. But going along that notion, it […]

The last meat thermometer we featured here on GeekAlerts was a talking one. And while the Electric BBQ Meat Thermometer doesn’t make a peep, it’s a whole lot smarter, that’s for sure. It can tell you whether your steak is rare or well done; just […]