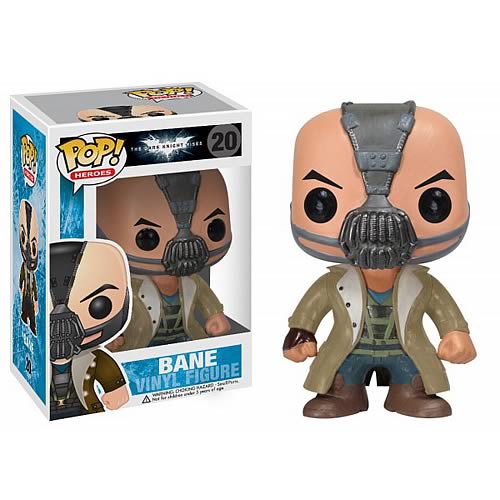 Bane is one of the toughest villains in the Batman universe, if not the toughest, because he actually broke the Batman. He’s super intelligent and freakishly strong and now he…looks adorable. This Dark Knight Rises Bane Pop! Heroes Vinyl Figure makes Bane look like a cute non-threatening nice guy.

This figure is modeled after Bane from the soon to be released movie The Dark Knight Rises. It stands 3 3/4-inches tall. I don’t know about you but I’m not so scared of Bane now that I’ve seen this figure.

What could this guy possibly do to the Batman in the new film? $9.99 from Entertainment Earth.

When you miss out on getting the Dark Knight Rises Bane Vest, you’ll have my permission to cry… although it would be better to just go ahead and get the vest. You don’t want Tom Hardy to see you cry, do you? Stylized after the […]

This Dark Knight Rises Bane MAFEX Action Figure depicts the villain from The Dark Knight Rises in great detail. He stands about 6 1/3-inches tall, and his coat can be removed. He also comes with interchangeable arm parts with coat sleeves or without. He also […]

The Dark Knight Rises will be hitting the big screen soon, so now it is time to collect the action figures. Don’t just buy one. Get the Batman Dark Knight Rises Action Figure Case. Collect them all and relive favorite scenes from the movie! You […]