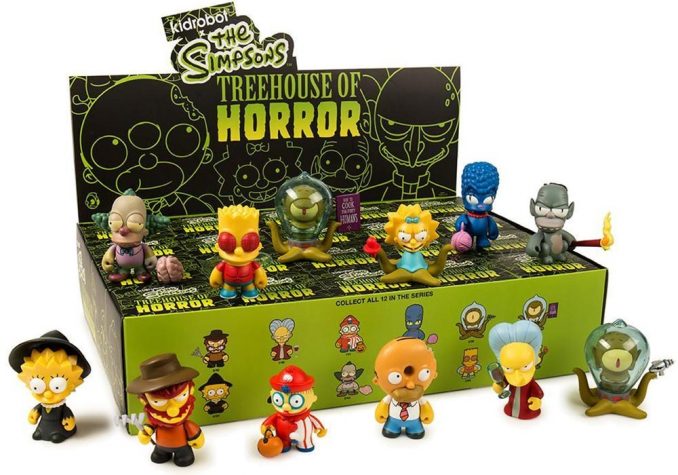 Each detailed and colorful vinyl figure in this set is about 3″ tall. My favorites would be the alien figures, Kang and Kodos, with Kang holding the “How To Cook For Forty Humans” cookbook from the gag on the show. Other awesome figures include the Lisa Witch, Krusty Zombie, Ralph Wiggum Clown, Maggie Alien, Homer Doughnut Head, Mr. Burns Dracula, and Bart Fly.

Back for a limited time from Kidrobot and The Simpsons comes the Treehouse of Horror Mini Figure Series! Featuring 12 of the wickedest Treehouse of Horror characters, this special The Simpsons Treehouse of Horror Blind Box Mini Figure Series is horrifyingly fun.  Each frightful and collectible 3 inch tall Simpsons figure is blind packaged in a foil bag and blind box to maintain the rarity and collectibility of each figure.  Even we don’t know whats in each box but we can guarantee mind-numbing rush of energy that is normally only possible by consuming hoards of drug store chocolate right before bed.

Simpsons Treehouse of Horror Mini Figures cost $11.99 each direct from Kidrobot. Order 20 to get the complete display box.

It doesn’t have to be Halloween to celebrate a Springfield tradition when you have The Simpsons Treehouse of Horror Giclee Prints. Others know the holidays are coming when the Charlie Brown holiday specials start playing endlessly on TV but I know we’re headed into the […]

Do you remember Slippery Stair from the Meeseeks and Destroy episode (Season 1, Episode 5)? You won’t ever forget it if you have this Kidrobot Rick and Morty Slippery Stair Figure. It’s a medium art vinyl figure from Kidrobot that features Morty and Rick riding […]

Bundt cake and chocolate-dipped strawberry, cookies. S’mores and hot cocoa, double-scoop ice cream cones, Jell-O. S’mores, caramel apples, key lime pie on rings. These are a few of my favorite things. How could we live in a world without these delicious desserts? Instead of eating them […]

This Simpsons Mighty Wallet is made of Tyvek and is eco-friendly. Also it looks awesome, with a ton of Simpsons characters all over it. Tyvek is a sturdy material that’s recyclable, expandable, and looks and feels like paper. It also resists tears, cuts, splashes of […]