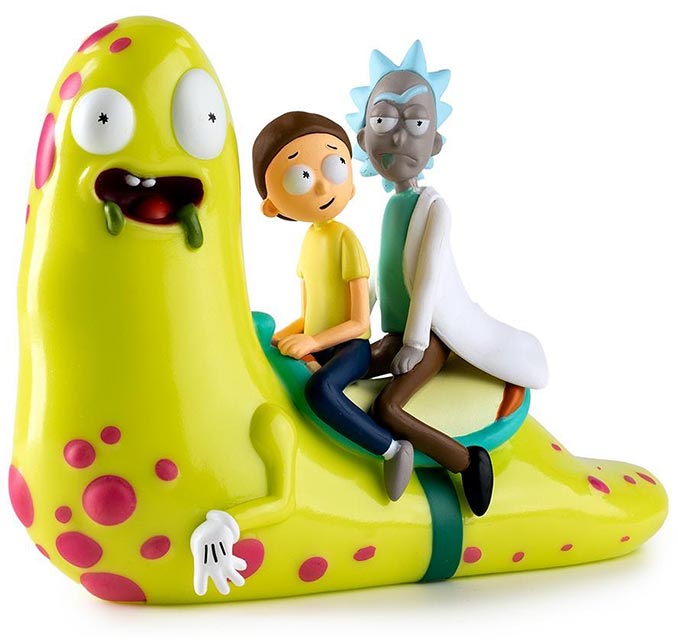 Do you remember Slippery Stair from the Meeseeks and Destroy episode (Season 1, Episode 5)? You won’t ever forget it if you have this Kidrobot Rick and Morty Slippery Stair Figure. It’s a medium art vinyl figure from Kidrobot that features Morty and Rick riding on the back of Slippery Stair. Word is, it cost them 25 schmeckles for the ride.

This Kidrobot Rick and Morty Slippely-Slippery Stair collectible vinyl figure is about 7″ long and is detailed on all 360 degrees.

Buy the Rick and Morty Slippery Stair Medium Art Figure for $49.99 at Kidrobot.com. It is also available for pre-order at Entertainment Earth. Too bad it isn’t just 25 schmeckles.

The Rick and Morty Mr. Meeseeks’ Box O’ Fun will be fun for the whole family. It recreates “Meeseeks and Destroy”. The button on the box plays your favorite Mr. Meeseeks quotes and doubles as a collectible Meeseeks box. Too bad it won’t actually summon […]

Yes you are. This Rick and Morty Mr. Meeseeks Cosplay Lounger is a comfy one size fits all adults outfit that you will want to wear all day long. It features a hood, a front zipper, and thumb holes. Oh,and also a helpful butt flap! […]