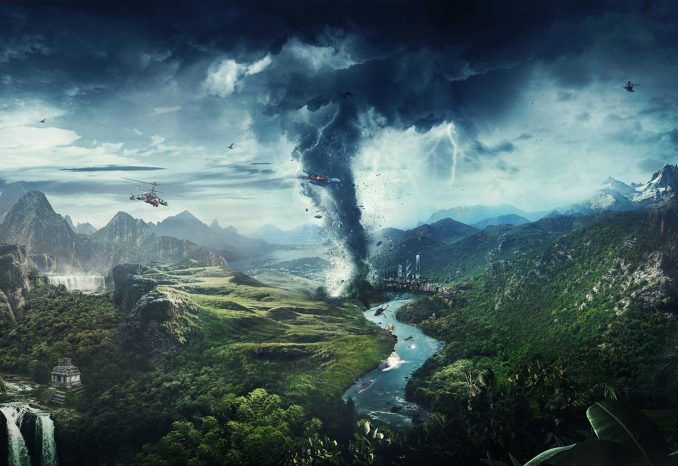 Games in the Just Cause franchise have always had impressive physics, but none have ever had the incredible twister effects shown in this Just Cause 4: Tornado Gameplay Reveal Video.

There are several impressive scenes in this trailer showing off the thrilling graphics and physics of the new Apex engine, including one where Rico Rodriguez gets in a storm chaser vehicle to pursue a massive tornado. You see the gigantic twister destroying objects in its path and lifting things up in spiraling trajectories.

Just Cause 4 will be released on December 4, 2018, for the PC, Xbox One, and PlayStation 4. There are 3 editions: Day One, Digital Deluxe, and Gold Edition. Each comes with the full game and pre-order bonus. The Digital Deluxe Edition adds 24 hours of early access, a Black Hand Prototype Weaponized Wingsuit, and a Black Hand Stealth Micro Jet. On top of those extras, the Gold Edition adds the Expansion Pack and the Golden Gear Pack. Pre-order now from Best Buy and get an exclusive $10 reward.

In Just Cause 4, gigantic Tornados rip through the destructible world, tear airplanes out of the sky, and send huge pieces of debris spiralling through the air.

This is not only visually stunning, but they open up unique and brand new gameplay opportunities that just aren’t available in any other video game. Thanks to the new Apex Engine, you’ve never seen anything like this before!

You probably had a pet rock back when you were still a kid, and your mom told you “no” when you asked for a puppy. If you find yourself in the same situation but want to give your child some sort of consolation that isn’t […]

This Sonic the Hedgehog Tornado Diorama Statue is perfect for fans of the speedy hedgehog. It is superbly detailed and stands 18-inches tall x 14-inches wide. It is also a limited edition of only 1,000 pieces! It depicts that time that Sonic and Tails take […]