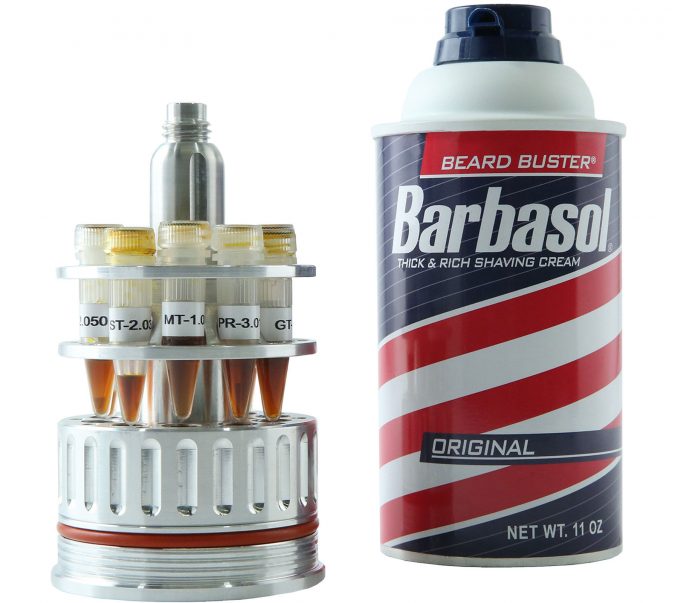 If you’re going to steal dinosaur embryos, you have to be very sneaky, just like Dennis Nedry in Jurassic Park. He had an elaborate plan to bypass security to access the valuable embryos as well as a special device to hold them and keep them cool for transport that was disguised to look just like an ordinary can of shaving cream. If you ever wanted your own copy of this ingenious device, check out this Jurassic Park Cryo-Can Replica.

Created using the original screen-used prop stored in the NBCUniversal archives, this Jurassic Park Cryo-Can Replica from Chronicle Collectibles is remarkably accurate. It includes 10 individually-labeled dinosaur embryo housings and actually features an internal embryo chassis that can be activated to raise up as you see in the movie. It won’t dispense shaving cream, cool the specimens, or actually include real dinosaur embryos, but it looks good enough to fool almost anybody.

When engaging in corporate espionage, you need to have a fool proof plan. Especially when the company you are trying to steal from is genetics leader InGen. Fortunately, Dodgson, from rival company BioSyn, has planned accordingly. The result — a self-contained transport mechanism for 10 fertilized embryos, fully cooled* and compartmentalized inside, and encased within the innocuous facade of a common can of Barbasol™ shaving cream.

The device was a stroke of genius – a very real coup in the exciting world of corporate theft. And the plan was flawless. Sadly, Dodgson’s man on the inside at InGen, the disgruntled Dennis Nedry, wasn’t so flawless –The device was lost, along with all 10 embryos.

Or so the world thought. A team of artists from Chronicle Collectibles recently managed to gain access to this genuine artifact, which was somehow found and rescued from the InGen site before the island’s destruction by volcanic eruption. All of the embryos were irretrievably lost, and the clever bit of the device that enabled it to emit actual shaving cream was damaged beyond recognition.  But the structure itself remained intact.

Emboldened by this unprecedented and unique access, those artists have successfully replicated the device’s structure as an homage to the efforts of Dodgson’s ingenious plan. Thus, Chronicle Collectibles is now pleased to present to the world the Jurassic Park Cryo-Can. Quantities are limited, so reserve yours today!

This Jurassic Park Cryo-Can Replica is $200 at Sideshow, where it can be pre-ordered. It is expected to ship in late 2020. It can also be ordered directly from Chronicle Collectibles, where it includes the exclusive Dennis Nedry’s park access badge.

You don’t need to know the magic word or have mad hacker skills to get your hands on the Jurassic Park Dennis Nedry and Dilophosaurus Goo-Splattered Pop! Vinyl Figure 2-Pack. Poor John Hammond. He just wanted to entertain people with giant dinosaurs. Instead, he created […]

If you are like most of us, you probably lounge around on your sofa or bed with your laptop on your lap. As you know, that can be bad for your laptop and your lap. In an effort to improve laptop cooling, NZXT developed and […]