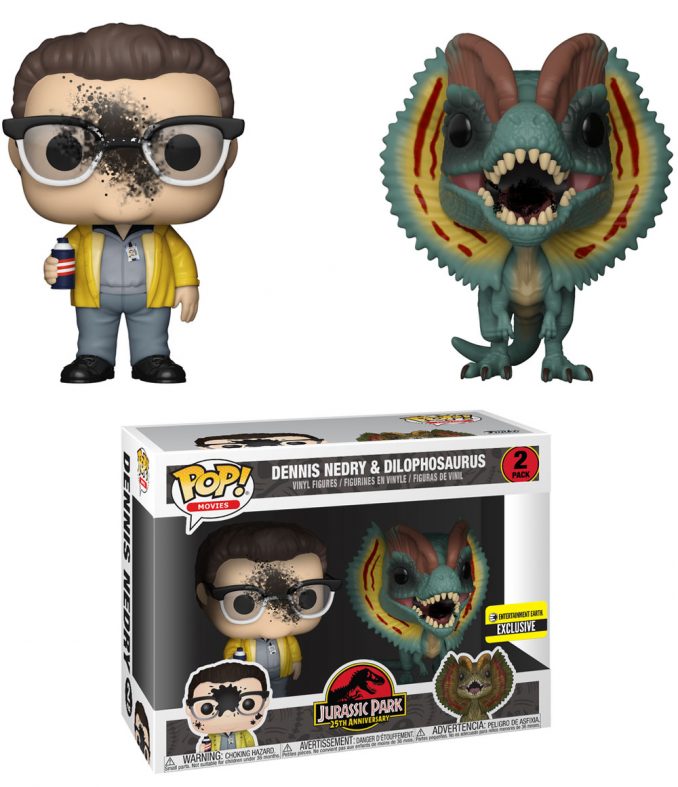 You don’t need to know the magic word or have mad hacker skills to get your hands on the Jurassic Park Dennis Nedry and Dilophosaurus Goo-Splattered Pop! Vinyl Figure 2-Pack.

Poor John Hammond. He just wanted to entertain people with giant dinosaurs. Instead, he created a theme park that kills people, and the poor guy never realized it all happened because of an act of sabotage by a greedy programmer.

Exclusively available at Entertainment Earth, this Funko 2-pack includes cute Pop Vinyl versions of Dennis Nedry and the colorful Dilophosaurus that showed a little bit of spit can be a whole lot of dangerous.

In addition to the goo-covered face, Dennis also has the fake can of shaving cream that holds the dinosaur embryos he’s attempting to steal.

Doctor Who The Flesh Goo Pod

If you enjoyed the recent Doctor Who episode “The Rebel Flesh”, then perhaps you were hoping that they would release a toy to go along with the episode. They have and it is the appropriately named Doctor Who The Flesh Goo Pod.

Get ready to add a master showman to your Funko collection with the Jurassic Park John Hammond Pop! Vinyl Figure. See the sweet little old man wearing white? He is the master of death and destruction, creating something that will scare you to death and […]