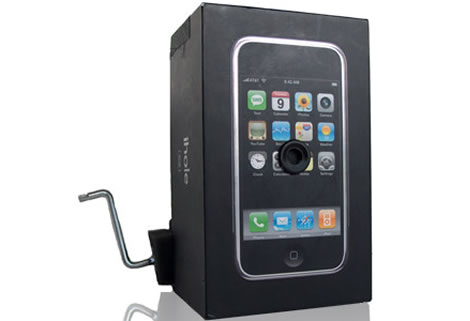 Remember that iPod Recycling Speaker by Bird-Electron from last month? Now there’s a way to make use of your iPhone box as well, by transforming it into a “revoluntionary analog photographic device”.

I tried to keep it simple and the only external items I used were tape, tinfoil (for the lens), a piece of foam, and a leftover screw and tightener from an old ikea desk. Oh, I also used a black washer for the cover of the lens but that was purely cosmetic. I used the cardboard lining that was on the inside of the original box to construct the film holders on the back. I even left the serial numbers intact, so if my roommate ever needed to return it he could (I don’t think I’ll be switching until the phones work on other networks). 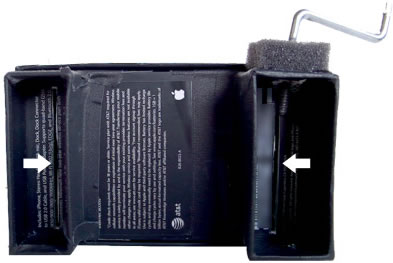 For the lens I used a small piece of tinfoil (the thicker stuff from the hardware store) punctured by a tiny needle. For feeding the film through the box, I cut two long, thin rectangles about 2mm wide on the left and right bottom (interior) box. I had some trouble at first with the tension, as I had to thread the film through backwards so the emulsion of the film would be facing the right way. On the right side, I punched a hole through the top and put the screw through the piece of film and then through the film holder. Once I threaded the film, I twisted the screw into an empty 120 film holder until it was secure. Then I loaded the film, threaded it through and taped both sides of the film holders shut and closed the box.

For more photos and info about the iHole, visit scothampton.com.

Do you feel like time is flying by way too fast? Do you sometimes wish that you can turn back the hands of time and go back to a time and place where everything used to be simpler? What if I told you I’d just […]

Clocks can’t get any geekier than this. The Purple Motherboard Pendulum Clock that was previously featured here on GeekAlerts definitely had a lot of appeal. The DIY Wall Clock was a pretty neat concept, too, because it provided you with the framework you needed to create […]

Sometimes it’s hard to show off geek love in a business environment but that’s not a problem with the Star Wars Business Card Holders because you can reveal your devotion to that galaxy far, far away while still appearing stylish and professional. Except for rare […]

If you’re starting to get bored with all the black and white of the Pixel Oven Mitts or all that gooey yellow happiness emanating from the Pac Man Over Mitt, then maybe it’s time for a change–an animalistic kind of change, that is. Get the […]

Sometimes when the world is getting you down and your stress levels are up, you just want to flip someone the bird. Give them a one finger salute. The Screw You Corkscrew does it for you, expressing how you feel and also helping you open […]