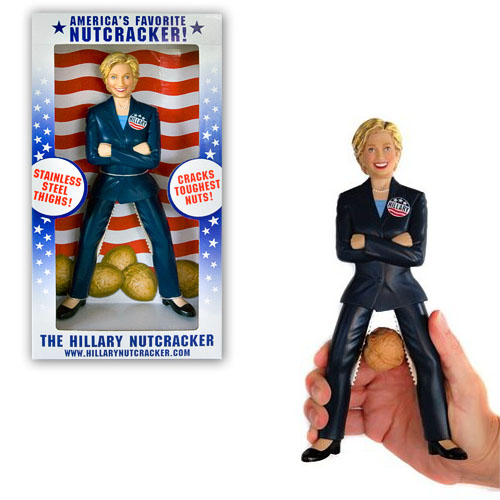 US Sec. of State Hillary Clinton is so tough that she could probably crush a nutshell with her fist. But instead, she’d rather crush tough GOP nuts with her personal nutcracker. Introducing the Hillary Clinton Nutcracker, featuring upper thighs made of stainless steel.

Hillary’s back on top as Secretary of State and she’s still busting out better than ever. She can crack cases, barriers, and Nuts like a supreme force. This Hillary Nutcracker is built strong just like the real thing and believe us when we say strong. We cracked 500 walnuts in a row and this Nutcracker didn’t waver on a single one! She works great at house parties, conventions, and in courtrooms.

They’ve done a rather flattering job replicating her face, and her nut-eating grin says, “Bring it.” She’s probably got a pile of random nuts in her desk saved up for a rainy day; a walnut named Newt, a hazelnut named G.W., and there are some remnants of the peanut shell she cracked a few years ago named Sarah.

Results from a recent Gallup Poll put Clinton at the top of the list as “most admired woman” for the tenth straight time. Earning such a title and a nutcracker made in her honor are definitely huge lifetime achievements. Only Hillary knows how to seek and destroy nuts in a world filled with nut allergies.

You can buy the Hillary Clinton Nutcracker at Amazon.com starting at $8.95, or at Stupid.com for $17.99.

Some other nutcrackers that at least look tough are the Stormtrooper Nutcracker and R2-D2 Nutcracker.

If you’re into unusual Christmas decorations, then this won’t be the first time you see a Nutcracker that isn’t sporting the standard-issue costume. First there was the wooden R2-D2 Nutcracker, that has, no doubt, helped you crack even the hardest of nuts. Now you’ve got the […]

R2-D2 was stubborn and occasionally disagreed with C-3PO but he was never one to back down from a good fight. Now when you find yourself struggling to crack open those tasty nuts, let R2-D2 come to the rescue. This wooden R2-D2 Nutcracker is sure to […]

The Star Wars TIE Fighter Nutcracker puts the power of the Force in your hands when the time arrives to crack a few nuts. Of course, I’m talking about the force exerted when you place a nut in this officially licensed Star Wars product and […]

Nutcracker ($39) – cracking nuts have never been so easy and fun. No more of those old tools where you’ll end up squeezing your finger and having nutshells all over the floor. The solid stainless steel base, domed top in black rubber and non-slip rubber […]

The Stormtroopers are like the Imperial’s police force, but what most people don’t know is that they are also excellent nut crackers. This Christmas crack your nuts with a Stormtrooper with Candy Cane Nutcracker. Vader would approve. This holiday-themed Star Wars nutcracker has a Santa […]

This Star Wars R2-D2 Nutcracker will serve all of your nut cracking needs and also look great on display. It is an awesome piece of functional holiday decor. Use the Force to crack open those nuts. Is there anything that this droid can not do? […]

Nothing cracks your nuts like the power of the Dark Side. Get into the holiday spirit with the 10-inch Star Wars Darth Vader Nutcracker and let a Dark Lord of the Sith help with those Christmas-time munchies. Nutcrackers go with Christmas like peanut butter goes […]