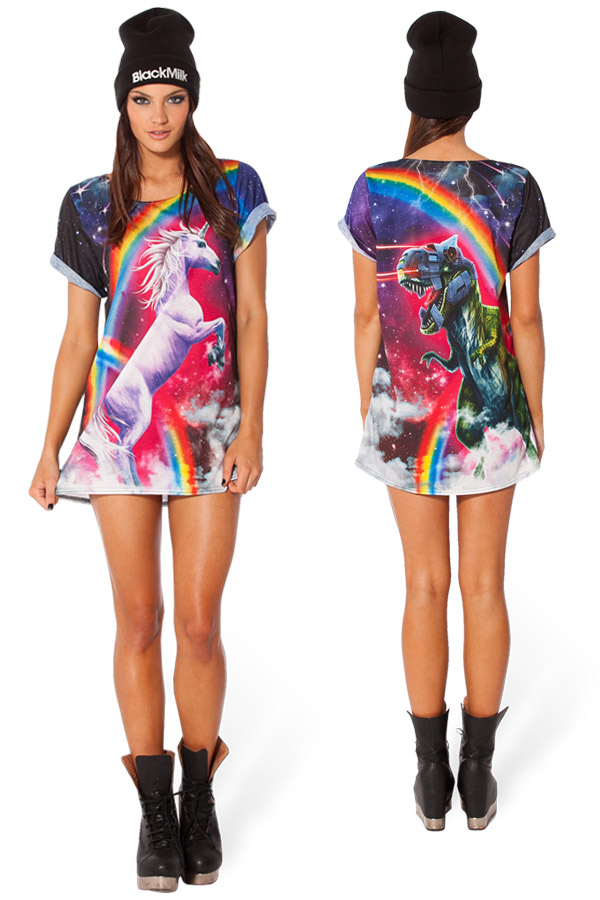 Unicorns battle giant robot dinosaurs on the Hell Yeah Boyfriend T-Shirt (BFT), which can be worn by either guys or gals.

Lasers. Did I mention that lasers were involved? Not on the unicorn (which is sad because that would be awesome) but on the dinosaur – the giant robot dinosaur. Or maybe it’s a cyborg. I suppose it depends on your preferences.

The 100% polyester tee features a unicorn on the front and a laser-shooting robot (cyborg?) dinosaur on the back. The only thing that would make this better is if it were reversible so you could decide for yourself which fantastical creature gets to rest on your chest.

The Hell Yeah Boyfriend T-Shirt (BFT) is available for $45 at Black Milk.

Knit Your Own Perfect Boyfriend

So you’ve had some pretty tough luck in the dating world, but still won’t allow yourself to be dateless on Valentine’s Day. Why not Knit Your Own Perfect Boyfriend and let him be your date? Knit Your Own Boyfriend Make the boyfriend of your dreams! Create the perfect […]

You’ll be casting a strange spell when you wear the Doctor Strange Boyfriend T-Shirt; a spell that will make everyone think you’re awesome. This 94% Polyester / 6% Elastane shirt is mystical, magical, colorful, and unisex, making it perfect for both guys and gals. Let […]

This Valentine’s Day, don’t just go with the usual flowers and candy. Give her something special to remember. Something like this Plush Unicorn Bouquet. There is nothing more magical than unicorns. You get a whole bouquet of plush unicorns, which are posable and are in […]

Fold Your Own Unicorn Calendar

If the world doesn’t end this December, you’re going to need a cool calendar to get you through 2013. The Fold Your Own Unicorn Calendar will help add a smile to your face even on those rainy days. Each page includes pop-out pieces so you […]

Put some mythical creatures on your ears and make a real statement with your jewelry. These Unicorn Earrings are just the thing. These front-and-back illusion-style post earrings make it look like Unicorns are jumping through your ears. Everyone will be jealous that you attract Unicorns […]