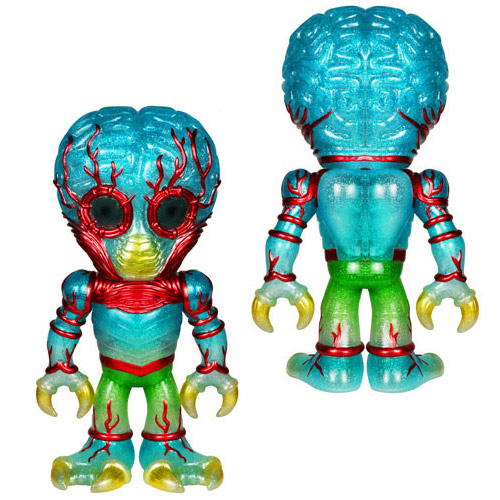 Anyone who likes the old Universal monsters will like this Universal Monsters Metaluna Mutant Hikari Sofubi Vinyl Figure.

It’s the Metaluna Mutant from the Universal Monsters movie This Island Earth. And he is now in the Funko Hikari line! This alien monster has some great detail, especially his veiny oversized brain and claws. This figure is limited to 1,500 pieces worldwide.

This figure makes a great gift for fans of vintage monsters. Only $49.99 from Entertainment Earth. Pre-order it now for January. Also at Amazon.com.

This Teenage Mutant Ninja Turtles Hikari Metallic Leonardo Sofubi Vinyl Figure looks pretty striking with a nice metallic sheen. He is an absolute must for any TMNT fans collection. That metallic sheen really compliments his blue and green, making him look like he came from […]

You have never seen the Star Wars: The Force Awakens baddie looking like this. Until now that is. The Star Wars Alloy Captain Phasma Hikari Sofubi Vinyl Figure looks pretty awesome. This limited edition version of Captain Phasma has an alloy deco of black and […]

I would say don’t make this Hulk Metallic Premium Hikari Sofubi Vinyl Figure angry, but he’s already angry. This exclusive Hulk Hikari Sofubi vinyl figure is a limited edition of only 750 pieces worldwide and comes individually numbered and packaged in a window box for […]

Like a bad penny, clone troopers always seem to show up. So this Star Wars Clone Trooper Dirty Penny Version Hikari Sofubi Vinyl Figure seems appropriate. This exclusive is based on the armor seen in Star Wars: Episode III – Revenge of the Sith! This […]

Check out this Star Wars Wampa Grey Skull Premium Hikari Sofubi Vinyl Figure. It is the fearsome Wampa from the planet Hoth as a Hikari Sofubi vinyl figure! This figure is limited to only 250 pieces worldwide. The snow beast from the epic sci-fi movie […]

The Batman Spectrum Joker Hikari Sofubi Vinyl Figure depicts the Clown Prince of Crime in Hikari form with fancy colors! Spectrum Joker features a shadowy, metallic coloring. He is wearing his purple suit and has his sugnature mischievous grin! He stands about 7-inches tall, is […]

The Star Wars Nocturn First Order Stormtrooper Hikari Sofubi Vinyl Figure is a thing of beauty. This Stormtrooper from Star Wars: The Force Awakens is now part of the Funko Hikari figure line. Check out that beautiful paint job. This piece is limited to only […]

Look at how sleek and stealthy this Hikari: Marvel Stealth Suit Iron Man is. He looks pretty awesome in black and silver. Hikari Sofubi means that this is a Japanese-stylized soft vinyl. It is a limited edition of only 500. Don’t miss your chance to […]