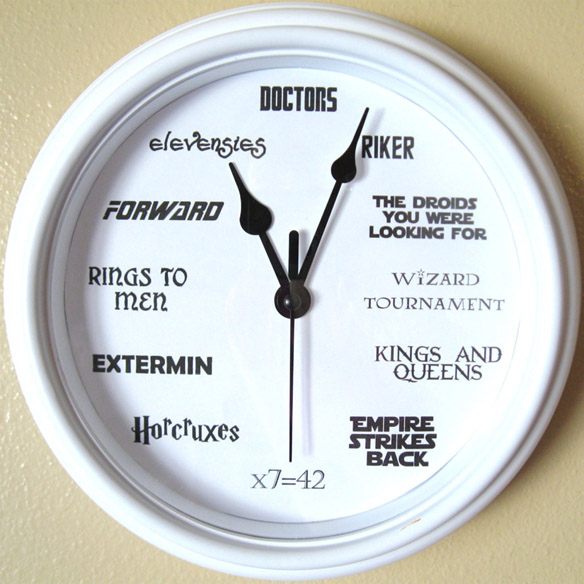 Is it a secret code? An ancient language long thought lost to mankind? It will take a special person to read this Geek Nerd Clock, which is what makes it so much fun.

Telling time is a piece of cake until you add a geeky twist to the numbering system. Fans of each will easily be able to tell what time is it, as well as understand the meaning of each reference. Others will be hopelessly lost. Take pity on them because they know not the joys they have missed.

Meaning of the references:

With a sturdy plastic frame and glass cover, the clock comes in white, silver, or black.

The Geek Nerd Clock is available for $23 at LetterThings’ Etsy store.

The life of a nerd can be hard sometimes because it’s not easy to display all that hard-won nerd knowledge that’s been acquired through sleepless nights of gaming and weekend binges of cult TV shows, but the Decorated Nerd T-Shirt makes showing off all those […]

Are you looking to convert a friend or get your child started in the right direction to becoming a full-fledged nerd?  It’s not easy being one of us.  It takes things like a Girl’s Guide to Dating a Geek and My little Geek ABC Book […]