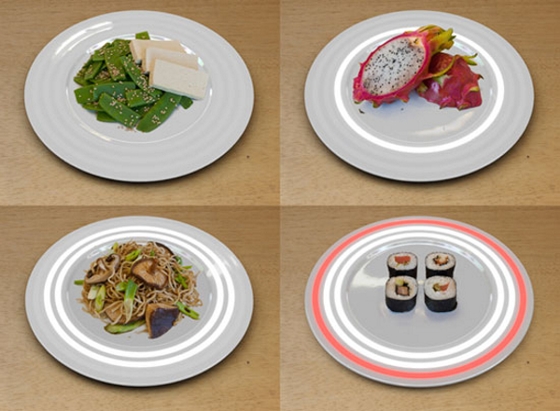 The world went through quite a scare with the nuclear crisis that rocked Japan after the devastating earthquake and tsunami struck the region. Reports of leaks at the Fukushima nuclear power plant flooded the air waves, with news that the country’s food supply had been contaminated with radiation.

Public safety is the major concern and Nils Ferber’s concept Fukushima Plate seems to provide a simple and cost-effective solution.

Ferber proposes integrating OLED rings into the ceramic plate and attaching a removable radiation detector at the base of the plate. Simply pop it off the plate to wash the plate or give it a rinse in dishwasher. 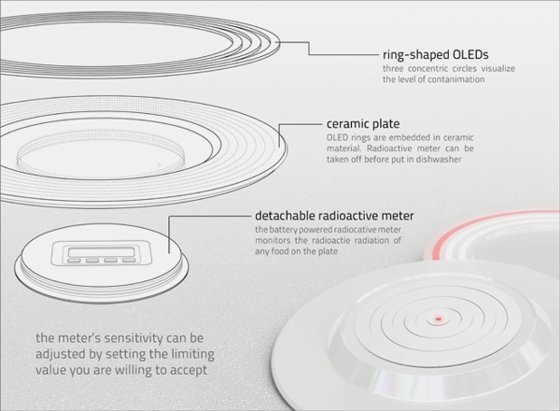 The number of rings that light up indicate the gravity of radiation contamination of the food that has been placed on the plate. What we’re aiming for, of course, is no rings, since that would mean that no increased levels of radiation have been detected. If three rings are lit up, then chances are it’s time to chuck the food into the bin for your safety.

Hopefully, some companies will pick up on this idea and begin producing it commercially. But for now, the Fukushima Plate remains a concept.

Scosche Industries is an award-winning innovator of iPad, iPhone and iPod accessories and they set out to do two things with the Scosche RDTX Portable Radiation Detector for iPod and iPhone. First given the tragedy that struck Japan, they wanted to try to protect people […]

Here in Canada, we tend to get excited when our ice cream starts melting. But for people in warmer climates, you’ve probably wondered if there was some clever way to prolong the freeze life of your ice cream, other than sticking it back in the freezer. […]

If you’re a geek who likes to entertain and impress with your mad cooking skills, then you’re going to want to have this molecular-looking Bubble Plate Set.

This radio-controlled, zero gravity, mini racing car is introduced as “the next generation of upside down-driving vehicles” – a smaller version of those wall-climbing R/C toys you might have come across before. Believe it or not, this sporty little racer is capable of driving across […]

Just in case you needed an excuse to play with your food; you’ve now got one.  The Construction Plate & Utensils come complete with a plate that resembles a construction site and three utensils that look like more like Tonka Toys that half transformed into […]