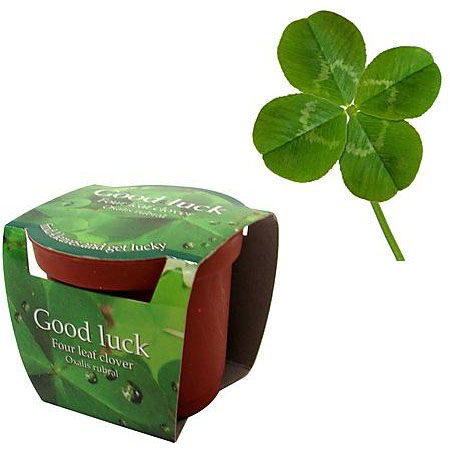 Some people have all the luck and others are just plain unlucky. For the latter, their stars have been misaligning since the very second they came into this world. What’s worse is when these unfortunates make some raunchy decisions, begetting a tsunami of troubles always worse than the storms before. Where’s the secret escape door? Maybe what’s needed is a shield, and not an emergency exit. The shield being this Four-Leaf Clover Planting Kit, which could be an effective way to thwart bad luck elsewhere. Even if it’s just the placebo effect that’s being staged, what harm could be done by growing a few good-luck charms?

Celtic and Druidic legends have long attributed magical qualities to the four-leaf clover, which has become a universal symbol of good-luck. Tradition has it that finding one of these rare clovers by chance in the countryside is an omen of good things to come…

This is a great gift to give a friend who’s experiencing a bout of mishaps and shenanigans. It’s a way of saying, “Hey, things are pretty messed up right now but your luck’s about the change.” Don’t worry about the plant being the cheater’s way out. Think of it more as a hypothetical life preserver or raft floating out to someone who’s been stung by a group of poisonous jelly fish and bitten by sharks.

Even if you don’t believe in good luck/bad luck, it’s still fun to have a plant full of four-leaf clovers. When I was a kid, I found 54 four-leaf clovers in my yard in the same patch of grass, and haven’t been able to find even a few since then. I still look when I get the chance, because four-leaf clovers are rare and exciting. Plus, I’ve broken a few mirrors in my day.

Grow your own lucky charms with the Four-Leaf Clover Planting Kit, available at Curiosite.com for $9.45.

Do some of your friends think you are a a super smart nerd while other know you as a stoner? It seems like a dichotomy, although these days geekiness, marijuana, and video games are fitting together more and more. Embracing this idea of a smart […]

“The Luck of the Irish” actually refers ironically to bad luck, but hopefully putting this Emtec Cloverleaf USB Flash Drive in your pocket will result in good luck. You can at least be assured that you won’t confuse it with your co-workers plain old boring […]

Sometimes life’s most beautiful artwork comes in the form of things found in nature. When you hang Glass Garden Globes, it’s a testament of how life can thrive on the barest minimum. We thrive on all our toys and gadgets. But we, like plants, also thrive on the free stuff […]