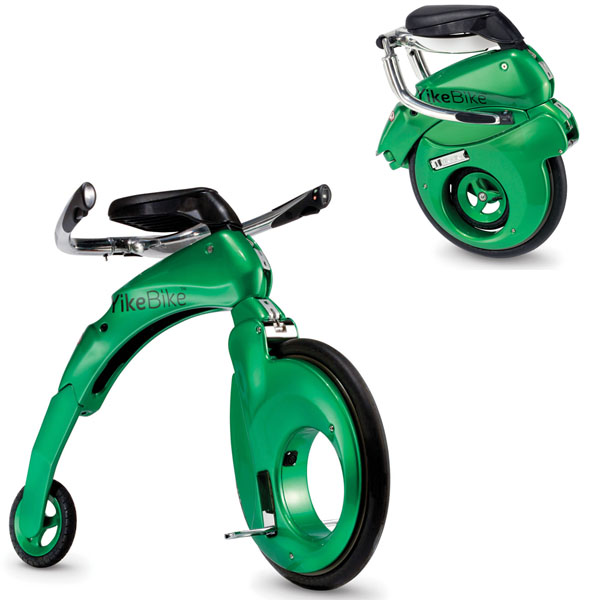 If you’re looking for something new in the world of bicycles, the Folding Electric Mini-Farthing will probably be hi-tech enough to catch your eye while still holding on to the retro idea that inspired it.

While it looks very sleek and futuristic, this stylish bike is actually a modern spin on the Penny Farthing, which was considered hot stuff back in the late 19th century.

Times have changed and the Mini-Farthing takes advantage of all that technology has to offer, even snagging a spot in the Guinness World Records for being the smallest folding electric bicycle in the world. The sleek, green machine, made of carbon fiber, folds down to 23 1/2″ L x 6″ W x 23 1/2″ H in just 20 seconds and can cover a range of six miles with a two-hour charge delivered by the included AC adapter.

Riding might take a little while to get used to because the handlebars will be on either side of you when you sit instead of the front, but the short wheel base makes sure you have superior maneuverability and the electronic anti-skid brakes insure smooth stops. The 450-watt electric DC motor drives the 20-inch front wheel, allowing for speeds up to 14MPH, and the small 8-inch rear wheel is used for steering.

Riders up to 220-pounds can take the eye-catching ride for a spin, and you don’t have to worry about not being seen because high-visibility LED lights provide maximum visibility, and the built-in brake and turn lights allow you to keep your hands on the handlebars at all times.

The Folding Electric Mini-Farthing is available for $5,000 at Hammacher Schlemmer.

A while back, we showed you a mini, Mini Cooper convertible powered by a remote control. Now what do you get if you reverse the effects of your shrink gun, point it at the mini, Mini Cooper, but fail to make the car reach full-size capacity? You wind up with the Mini […]

There are all kinds of pizza cutter out there that will help you to slice up your pizza quick and easy, but if you want something that gives you some extra leverage, check out the Folding Pizza Wheel. It features a non-stick coated wheel and […]

At first, electric vehicles were things we’d only associate with kids. Then came a wave of electric and hybrid vehicles for grown-ups. Though they haven’t gone mainstream yet, they’re definitely inching their way towards cooldom. Fisker Karma, anyone? Electric bikes are being swept up on the same jetstream. It’s good because gas […]