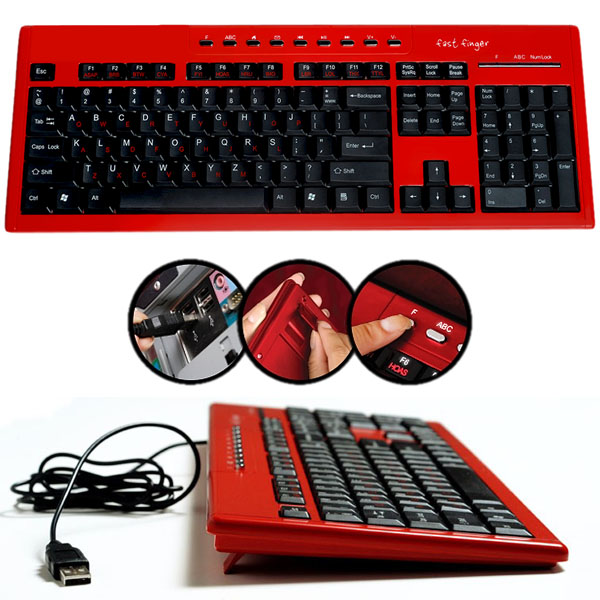 This might only be a novel toy for people that spend a lot of time on front of a computer, but newbies that lack serious typing skills will probably stand up and applaud for the Fast Finger Alphabetical Keyboard. If you’re a member of the hunt-and-peck brigade (hello fellow brothers and sisters), a keyboard can be an intimidating landscape because it seems like someone just threw the letters down and let them stay where they landed.

QWERTY? What kind of alphabet is that? Well, the QWERTY keyboard is considered the standard keyboard, but that doesn’t matter to anyone that only knows E should be planted firmly between D and F, and it shouldn’t be traipsing around with those other letters. This keyboard puts things back in perspective by keeping the letters in the same alphabetical order you learned back in grade school. Hunting and pecking just got a lot easier because now it’s easy to know A is towards the top and Z is down at the bottom. Of course, if you decide to climb up the upper levels of typing/keyboarding, the layout can be switched from alphabetical to the standard QWERTY style.

If you’re looking for a little fun, and maybe just a little revenge, swap your co-worker’s keyboard with this one. All of sudden, they’ll be the one hunting and pecking, with one tentative finger wandering around like a little lost puppy. Switching keyboards is a piece of cake because there’s no software to install; just plug it into the USB port of any PC, MAC, or laptop.

Put a twist into your typing with the Fast Finger Alphabetical Keyboard for $23.99 from Skymall and at Amazon.com from $22.99.

Verbatim just announced today that their Wireless Bluetooth Mobile Keyboard for iPhone and iPad is now shipping to retailers nationwide. This ultra-slim foldable keyboard is designed to work with Bluetooth enabled iPhones and iPads, making it much faster to type long messages.

The “Fast Fingers” USB keyboard gives you three options for how to use the keys. Hit the ‘ABC’ button and you will be able to write with the keys in an alphabetical order. Disable the ABC’ button and you can start typing as with […]

Always mixing up those darned “Qs” and “Os”? Always hitting the wrong keys and ending up with documents with a whole lot of misspelled words? These are just several of the complaints my mom always has when she uses my PC, with the keyboard all […]