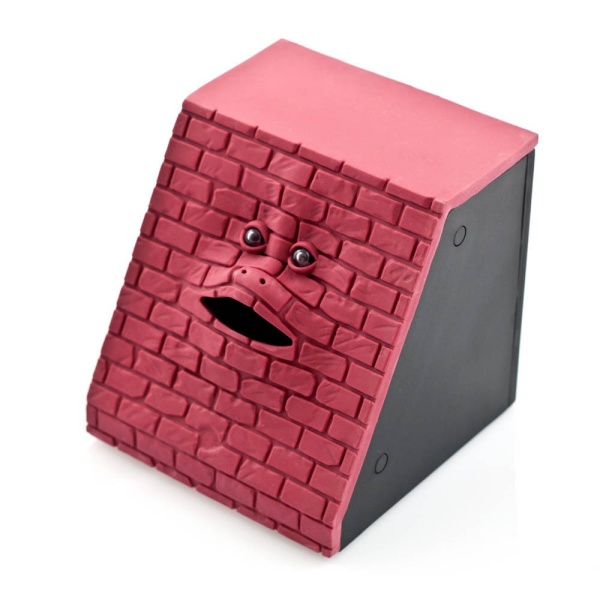 Does your coin bank have a face? Well, if you have a Face Bank, then your answer to that would probably be “yes.” I have to admit that it’s a bit creepy, but I think you’ll eventually get used to it and maybe even find it adorable after a period of time.

You see, the Face Bank isn’t just a frozen face on the surface. Rather, it will get quite animated and chew on your loose change as your drop them in, one by one. It’s like getting gratification of some sort for saving up your dimes and pennies because your coin bank reacts to each and every deposit you make into it.

He might not be the best looking bank around but he’s a little sweetheart really and will never say no to any spare change you’d like to feed him. Face Bank has to be the most fun way to save money. Because of his motion sensors, he knows when a yummy scrummy coin is coming in. Just pop the coin in his mouth and watch him gobble it up. Nom nom nom. An addictive way to get yourself or the kids saving up for a special something, although you might find yourself having less money than before because you’ve put it all into your new favorite toy.

Forget about summoning the powers of Darkness with the Necronomicon. You want to summon the power of the (Sesame) Street with The Necron-Om-Nom-Nom-Nom-Nicon T-Shirt. Drowned in milk, torn in half, chunks ripped out of his delicious body. This little cookie has been tortured enough and […]

Nom Nom Bacon or Sushi Scarves let you take your breakfast with you out into the cold. Of course since it is made of yarn, you can’t actually eat it, but it still looks good around your neck. Nom nom scarves are 100% acrylic and machine […]

We saw these small pocket organizers before with funky designs like a Taco or a Peanut Butter and Jelly Sandwich. However, around the holidays a Christmas Tree Cookie Yummy Pocket would be much more appropriate. There are actually three different Christmas Cookie designs to choose […]

I admit, one of the reasons why I got hooked on Cut The Rope was because of how adorable Om Nom looks. The game is loads of fun too, but I wouldn’t have been as into the game as I was if the character I […]

Move over Play-Doh, now there’s something yummier. Play-Doh is great and all. Sure it delivers hours of entertainment, is technically non-toxic and edible, but it’s not like we enjoy eating mouthfuls upon mouthfuls of its chewy, salty goodness. Yummy Dough, on the other hand, has all […]

You might’ve noticed that we’ve been randomly writing about food-related items lately. That’s because we’re getting ready to stretch our stomachs for the onslaught of rich meals, cookies and eggnog. The Christmas Tree Cookie Yummy Pockets will beautifully store your little items like money and gift cards, but if you need […]

This Pac-Man Nom 16 oz. Pint Glass is for serious Pac-Man fans. Pac-Man loves to eat as much as you do. He just prefers dots, ghosts and power pellets. Drink up and show your love of classic arcade games with this cool glass and contemplate […]