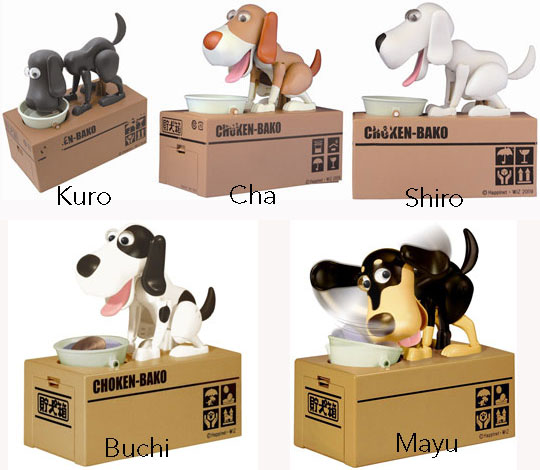 The bank pup mimics the exuberance most canines have while munching their nibblets. These coin banks feature different dogs, so you can pick the one that looks most like your dog or the one you’d pick out. They all have googly eyes, a pink tongue sticking out, and floppy, wiggly ears.

If you have a kid who’s begging for a dog, maybe you can motivate him/her to save up money for it with this bank. It’s taken me over three decades to fulfill this dream, but it’s never to early to start saving.

The Choken Bako Doggy Bank has been somewhat of a sensation in the press. It’s been featured on Jay Leno’s Tonight Show, on CNN, and has won an award in the “Hot Novelty” category from the UK’s Giftware Association.

Different versions of the Choken Bako Robotic Doggy Bank can be found on several sites. It runs for £9.99 in Britain’s Totally Funky, from $19.86 on Amazon.com, and $60 at the Japan Trend Shop.

So you’re sitting in your living room, watching a rerun of the Super Bowl and stuffing handfuls of popcorn into your mouth, when your dog trots toward you with an expectant look. Not all human food is fit for dogs, but who says your canine […]

If you thought the Crafty Cat Bank was adorable, you’re also gonna like this Sutakora Cat and Mouse Coin Bank.

Vacuuming is one of the chores that I always try to beg off on. But with the Seven Day Scheduling Robotic Vacuum, you won’t really have to do any of the vacuuming yourself because you can just program this handy bot to do all the […]

When I was a kid, my mom would constantly remind me to stop spending it all on candy or dolls and save it up for a rainy day. I didn’t really get the whole concept of saving versus spending, and I think it was all […]

Saving money is fun if you have the Arcade Game Piggy Bank. This piggy bank is styled with the retro look of the Space Invaders arcade game, and includes a playable video game clearly based on the classic. It is battery powered, stands about 6 […]