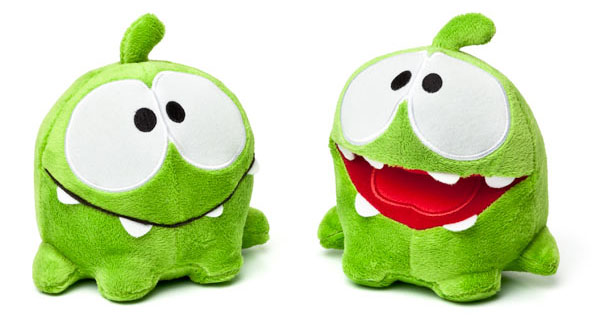 I admit, one of the reasons why I got hooked on Cut The Rope was because of how adorable Om Nom looks. The game is loads of fun too, but I wouldn’t have been as into the game as I was if the character I had to feed candy to looked like the Grinch. And now you can have a piece of Om Nom in the real, physical world with the Cut The Rope Plush.

There are two versions of the Cut The Rope Plush available: one showing a very hungry Om Nom, and another depicting a smiling Om Nom that’s eagerly awaiting for some sweet treats to satisfy his sweet tooth. Who could resist that face?

Some other adorable plush toys include the Canned Haminal Plush Toy and the Doctor Who: Adipose Plush Toy. 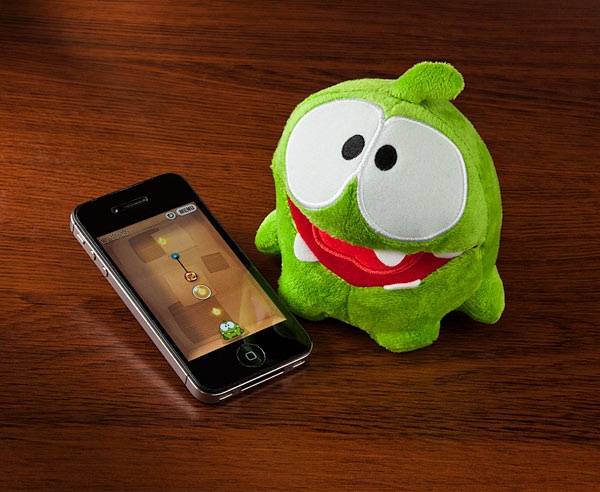 If you’ve fallen prey to the adorableness of Om Nom, we have good news. You can get your very own Om Nom plush to snuggle and keep you company at work or home. He’s about 5″ in diameter, which is a great size for a desk top friend or object to hurl across the office. But please don’t throw Om Nom, unless you’re throwing him in the direction of the nearest candy dish.

The Cut The Rope Plush should be back in stock soon at ThinkGeek for $9.99.

Forget about summoning the powers of Darkness with the Necronomicon. You want to summon the power of the (Sesame) Street with The Necron-Om-Nom-Nom-Nom-Nicon T-Shirt. Drowned in milk, torn in half, chunks ripped out of his delicious body. This little cookie has been tortured enough and […]

Nom Nom Bacon or Sushi Scarves let you take your breakfast with you out into the cold. Of course since it is made of yarn, you can’t actually eat it, but it still looks good around your neck. Nom nom scarves are 100% acrylic and machine […]

This Pac-Man Nom 16 oz. Pint Glass is for serious Pac-Man fans. Pac-Man loves to eat as much as you do. He just prefers dots, ghosts and power pellets. Drink up and show your love of classic arcade games with this cool glass and contemplate […]

Ever try jumping rope to burn calories. It’s a great exercise. Rocky Balboa could tell you that. The Calorie Jump Skipping Rope will help you out by measuring your exercise, to let you know how you are doing. Just adjust the rope to your height […]

Selina Kyle believes it’s important to stay in shape, which is why she’s jumping rope on the Catwoman Jump Rope Art Print. It’s important to keep up with cardio when there’s a chance you might suddenly have to run from a big bat. Inspired by […]

Most of us could do with a little less body fat; but since we probably won’t be getting that pill from Adipose Industries, we might as well get the next best thing. The Doctor Who: Adipose Plush Toy is a sweet reminder of all things […]