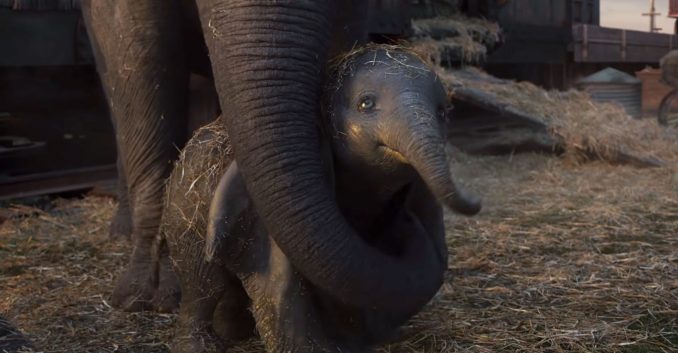 It’s only a month until the released of Disney’s live-action remake of Dumbo, and today they released a new TV spot trailer. Check out the Dumbo – Generations TV Spot. Since it’s meant to be a television commercial, it’s only 30 seconds, but that seems enough to give you a general feel for the film.

Dumbo (2019) is directed by Tim Burton and stars Colin Farrell, Eva Green, Michael Keaton, Alan Arkin, and Danny DeVito. It will be released in theaters on March 29, 2019.

Circus owner Max Medici (Danny DeVito) enlists former star Holt Farrier (Colin Farrell) and his children Milly (Nico Parker) and Joe (Finley Hobbins) to care for a newborn elephant whose oversized ears make him a laughingstock in an already struggling circus. But when they discover that Dumbo can fly, the circus makes an incredible comeback, attracting persuasive entrepreneur V.A. Vandevere (Michael Keaton), who recruits the peculiar pachyderm for his newest, larger-than-life entertainment venture, Dreamland. Dumbo soars to new heights alongside a charming and spectacular aerial artist, Colette Marchant (Eva Green), until Holt learns that beneath its shiny veneer, Dreamland is full of dark secrets.

Fans of the TV hit series Big Bang Theory will appreciate and understand the importance of the Sheldon’s Spot T-Shirt. As anyone that suffers from obsessive-compulsive disorder will attest, finding the best sitting location based on optimal television viewing, lighting, airflow, and cushion density is […]

Is there anything cooler than Spider-Man’s suit? The answer is no. Especially when it is done up in black and white. This Amazing Spider-Man Spida-Spot T-Shirt is stunning. How can you wear a regular T-shirt after seeing this thing? It is done in the style […]