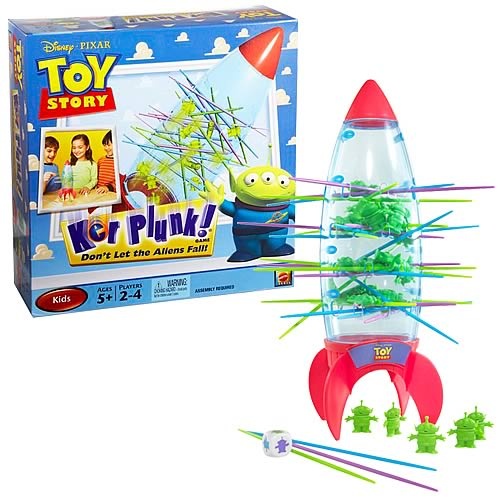 How many aliens can you keep from going Ker Plunk! in this Disney Pixar Toy Story Ker Plunk! Game? This version of the game is a fun way to introduce the game to kids who are in that stage of their lives where they’re just into everything and anything that has a fun-looking cartoon character or alien on the game.

My nephew used to think that the goal of the game (that’s been all spruced up in the Disney Pixar Toy Story Ker Plunk! version) was to make all the aliens plunge down once the sticks have been removed. Obviously wrong, but he looked like he was having so much fun that I couldn’t break it to him. While we’re on the subject of games, have some more kid-friendly fun by having a go at the FishingDarts Magnetic Dart Game and Tetris Link.

Toy Story Ker Plunk! is a new twist on the original game of Ker Plunk! that’s been a family favorite for years! Get ready to blast into action with the Pizza Planet Rocket Ship that houses the aliens. Each player takes turns pulling out the sticks and the winner is the one with the least number of aliens that go kerplunk! 2 to 4 players.

The Toy Story movies are a lot of fun for all ages and one of the neatest characters from the movies are the little aliens. If you enjoy them as much as I do, check out this Disney Toy Story Aliens Alarm Clock Radio. This […]

Kids love Disney’s cars movie. Many adults too actually. One of their favorite characters is Mater. If you are a fan, you might want to display this Disney Pixar Cars Mater Tape Dispenser proudly on your desk. Whenever you need some tape, you’ll be reminded […]

The U.S. Postal Service has announced that they will be releasing a series of Pixar postage stamps next year. The stamps features characters from the movies Cars, Ratatouille, Toy Story, Wall-E and Up. Since 1986, Pixar films have stretched the boundaries of our imagination with […]

It’s a race against time and the other players in the Pictureka Disney Edition Game. The point of the game is to spot the character in the current card. Yell out “Pictureka!” once you spot it so you can keep the card. It follows the […]

It was only a few days ago that we wrote about the Wireless Mickey Mouse Glove USB Mouse and now another Disney themed gadget has been released; A 4-port USB hub cable that looks like the 3-eyed squeeze toy aliens from the Toy Story movies.

Did you enjoy that Toy Story themed Alien 4-Port USB Hub Cable that we wrote about a couple of days ago? If you did, then this digital camera inspired by the same 3-eyed rubber toy characters may be right up your alley.

Fans of the hit movie series are going to love this Toy Story Aliens Floating Rocket Egg Attack Statue. “The Claw chooses who will go and who will stay.” Just like in the film Toy Story, this miniature replica statue of the crane game can […]