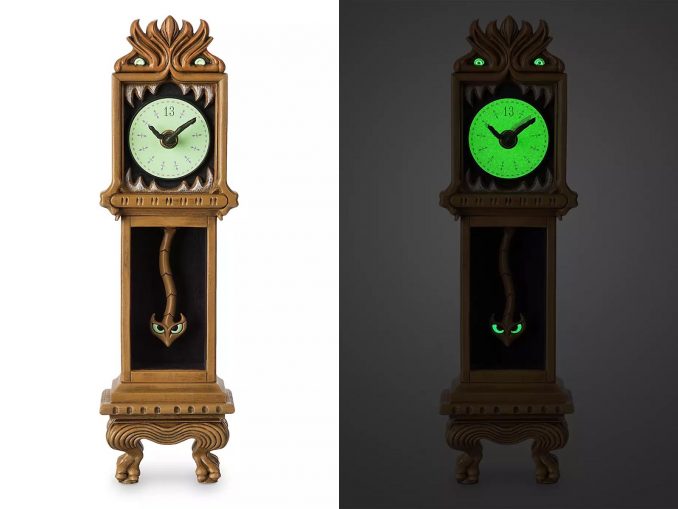 Modeled after the grandfather clock in Disneyland’s Haunted Mansion, this Disney Haunted Mansion Clock looks spectacular day and night. That’s because the clock face—and a number of eyeballs—of this ghoul-shaped tower glow in the dark.

Just like the clock at the Haunted Mansion in Disneyland, this clock is fully sculptured to look like a living monster. It has a ’13’ on top instead of the normal 12, there are creepy fingers for clock hands, and the pendulum is a swinging snake. It is battery operated, so you can place it anywhere. It measures about 13″ tall and 3.5″ wide.

Invite the spooky aura of The Haunted Mansion to your home with his frightfully cool clock! The glow-in-the dark face features a ”13” at the top, creepy fingers as hands, and a snake pendulum – all inside a ghoul-shaped tower.

This Disney Haunted Mansion Clock costs $80 and was specially created for the Walt Disney World Resort and Disneyland Resort. However, you can also buy it online at Shop Disney.

Getting tired of everything black and white and pixelated like the Pixel Time Wall Clock currently hanging on your wall?  Looking for something less minimalistic like the Poketo! Icon Clock?  Then keep your eyes open and your CPUs cracked open even wider.  Some people wear […]

It’s mostly true – dog is man’s best friend. But every once in a while, there’s that dog who thinks that man is dog’s best servant. And he probably lives in a house like this colonial Dog Mansion. You don’t want to know how much that […]

Rooftop terraces are the place to be when the sun goes up, and even when the sun goes down. Even though it might not be possible to escape to a posh rooftop lounge right away, this Mansion Planter could serve as a little piece of architectural eye candy […]