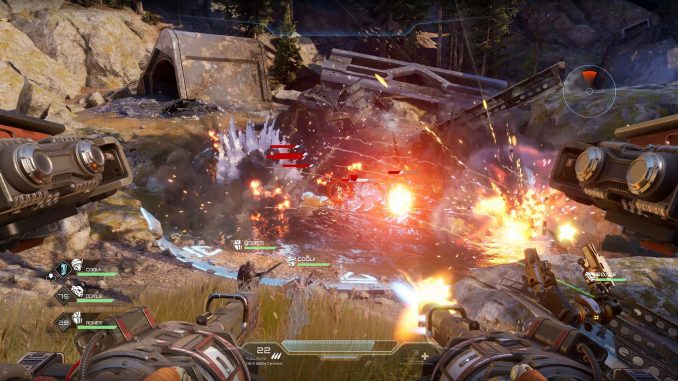 Pilot a heavily armed Gravcycle in Disintegration, a new sci-fi first-person shooter unlike any other. Command your troops on the ground as you battle through a thrilling single-player campaign and compete in frenetic PvP multiplayer against other pilots and their crews.

In Earth’s near future, climate extremes, overpopulation, food shortages, and a global pandemic led to nations collapsing and humankind on the brink of extinction. Scientists adopted a means in which the human brain was removed and surgically encased into a robotic armature; a process known as Integration. It was meant to be a temporary solution to an unavoidable crisis.

It was a good thing for decades, allowing humans to survive. But some of the Integrated saw this new form as the future of humanity. With no desire to reverse the process, the post-humanist Integrated stratified, calling themselves the Rayonne. Global war soon erupted, and Rayonne forces now seek to hunt down any remaining humans, forcing their integration, and destroying those who don’t share their views.

In Disintegration, you play an Integrated character named Romer. He’s one of many who rebelled and are now outlawed by the Rayonne.

It’s up to you to lead a small group of these Outlaws, people who have chosen to fight back and survive, into a brighter future where we protect those they care about and hope to one day become human again.

Watch the Chernobylite Announcement Trailer to learn about this science-fiction survival horror video game that will be coming to Steam during the Autumn of 2019. If you like a post-apocalyptic survival with a Russian twist as in Metro, this game should be right up your […]

GeekAlerts has shown you the ultra-tough G-Form Portfolio Cases in the past and now they are introducing the G-Form Reverse Ballistic Edge & Extreme Hydro iPad Sleeves. Perfect for the person on the go or the college student that always seems to be dropping things, […]

Terminator meets classic Planet of the Apes on The Future After The Future Art Print, featuring a future where humans are even more screwed than before. Humanity fell and then the apes took over… and then they created Skynet, which eventually took over the entire […]

When you hear about G-Form, you think of the G-Form Extreme iPad Cases that can protect an iPad dropped out of an airplane or thrown from a speeding sports car. They have taken the same revolutionary impact absorbing RPT (Reactive Protection Technology) they use to […]