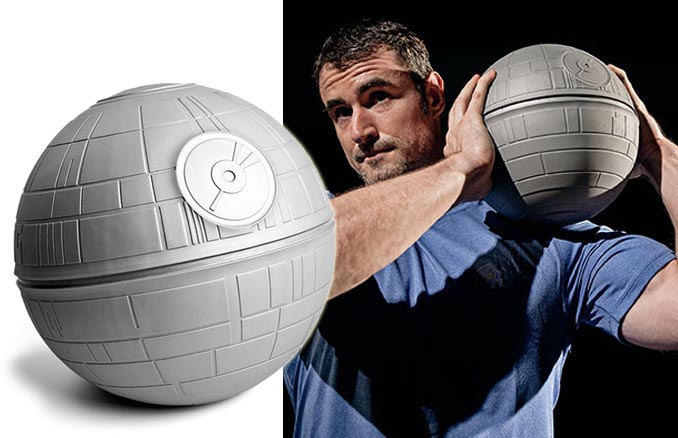 Onnit, the company behind the cool Han Solo Carbonite Yoga Mat and the awesome Star Wars Kettlebells is also making a Death Star Slam Ball. If you don’t know what a slam ball is, it’s a weighted fitness ball you can use to enhance your workout routine to enhance your speed and explosive power. They are similar to a medicine ball, except that slam balls are designed for throwing exercises. Because of this abuse, they must be very strong, which is why the Onnit Death Star Slam Ball is constructed of incredibly strong and dense polyurethane rubber.

This Death Star Slam Ball looks magnificent, and should give an extra incentive to exercise. Who doesn’t want to increase their speed and explosive power? Weighing in at 20 pounds with a 10″ diameter, this weighted fitness ball should give you an excellent workout.

That’s no moon …… but it’s no medicine ball either.
A slam ball is a weighted fitness ball which can be used in a variety of exercises aimed at increasing explosive power and speed. Great for traditional medicine ball movements like overhead slams and squats, as well as more modern uses like wall ball training. The constant dropping, throwing, and slamming a traditional medicine ball suffers inevitably takes a toll on the ball itself. The Death Star Slam ball is made of incredibly strong and dense polyurethane rubber, giving it supreme defense against any rebel attack. The Death Star Slam Ball is truly a technical terror that has been constructed with no weaknesses (that we know of).

At 10” diameter, and weighing in at 20lbs, this slam ball is designed to be used by anyone looking to increase their power and speed. The surface detail of the trenches and ridges on the Death Star Slam Ball not only look incredibly cool, they provide additional grip to help you maintain control off the ball during intense workouts.

I’ve never been a very good Scrabble player. While I have a pretty extensive vocabulary, I think it’s hard to win if you don’t study one of the Scrabble dictionaries that list words that don’t really sound or seem like words anymore. Despite that, I […]

You’ll never be alone with the Portal Weighted Companion Cube Plush. It’s instantly recognizable by players of the Portal games, with it’s endearing baby pink heart emblazoned in the middle of each surface of the cube. Throw it around on your bed, prop it up […]

Not enough fiber in your diet? I guess that means you’ll be there for awhile. Slam Dunk Toilet Basketball will give you something to do to pass the time. Never be bored in the bathroom again. You get a basketball net, 3 balls, a mat, […]

That’s no moon. It’s a Star Wars Magic Death Ball T-Shirt, and there’s a very good reason to have a bad feeling about it because the might of the Magic 8 Ball has been corrupted by the power of the Dark Side. Come on. With […]

Workout in Galactic Empire style with these amazing Star Wars Kettlebells from Onnit. Sculpted in meticulous detail and cast in solid iron, these heavy weights bear the likeness of Darth Vader, Boba Fett, and an Imperial Stormtrooper. Perfect for ballistic functional training, these durable, top-quality […]