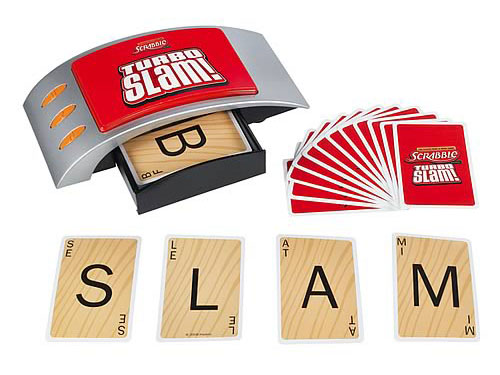 I’ve never been a very good Scrabble player. While I have a pretty extensive vocabulary, I think it’s hard to win if you don’t study one of the Scrabble dictionaries that list words that don’t really sound or seem like words anymore. Despite that, I still enjoy playing Scrabble with an average (and untrained) person during my downtime. The Scrabble Hyper Slam Game, however, offers a new and different way of playing the classic vocabulary word game.

In Scrabble Hyper Slam Game, it’s all about slapping, slamming, and spelling out words. It’s definitely faster paced than the board version of the game, which should make it more fun and lively for the players. Check out the Rotating Oversized Scrabble Game if you want to play it traditionally, or the Scruble Cube if you’re into both Scrabble and solving the Rubik’s Cube.

How fast can you create words? Slap down cards to change the words on the table. Then, slam fast when you hear the turbo sound from the Turbo Slam unit. If you slam first, grab an action card. What’s in store for you? The only way to tell is to play, slap, and slam! The Scrabble Hyper Slam Game includes an electronic Turbo Slam unit with storage tray, 55 letter cards, 12 action cards. and rules.

The Scrabble Hyper Slam Game is available from Entertainment Earth for $19.99.

Scrabble fans are going to love these Scrabble Beer Mats. They will keep your tabletop clean and you can also use them to sharpen your Scrabble skills. Plus your guests will love them. You get 54 high quality tile coasters, made from recycled pulp board. […]

If you are a Scrabble fan, then you probably wish you could have the World’s Largest Scrabble Game. Even if you do manage to get your hands on that, you are still going to need something to hold you over during those long commutes to […]

Are you a logophile (lover of words) that turns your nose up at Scrabble because there’s no challenge there? Gird your loins for the ultimate word battle because the Deluxe Edition Super Scrabble is here to put your talent to the test. While the traditional […]

The Hobbit Scrabble Board Game

You haven’t played Scrabble until you’ve played the Middle Earth version. The Hobbit Scrabble Board Game will become your precious as soon as you start playing. This one board game will rule them all. This game celebrates Peter Jackson’s The Hobbit: An Unexpected Journey. Players […]

I’ve always loved playing Bananagrams. Aside from being a fun way to exercise your brain and determine the depth of your vocabulary, it’s also extremely handy and hassle-free because you don’t need any boards, pencil, or paper to play it. All you need are the […]

If you are a fan of Scrabble with a sweet tooth, this chocolate scrabble game is perfect for you. Although I don’t think it will last long since it will be delicious and features chocolate letter tiles, made from the finest Belgian chocolate. A triple […]

Get your game off the table and onto the wall with this Scrabble Message Board Game. It’s a whole new way to play the classic game. This new version of the games uses magnetic tiles and tile racks to keep it all in place and […]