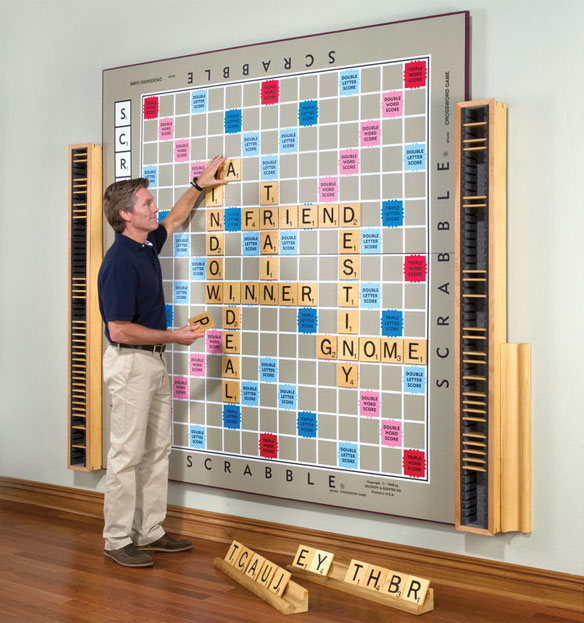 If you’ve got some money to burn and if Scrabble happens to be your favorite game in the world, then you might want to check out the World’s Largest Scrabble Game. And when we say the world’s largest, we really do mean the world’s largest–and possibly quite the most expensive version of Scrabble you can find.

The World’s Largest Scrabble Game is figuratively off-the-wall and literally on the wall. There are only nine of these in existence, all handmade by John Kahn, who is a well-known mixed media artists and colossal pop art creator. A lot of craftsmanship and work went into making each of these boards, which is probably why the price tag is also as massive as the size of the game itself.

Spanning over 49′ sq.–nearly 5x the size of the original–this is the world’s largest wall-mounted Scrabble game. Meticulously constructed from Russian birch plywood, the 3/4″-deep back board is overlaid with the classic purple-hued background of the original game, laminated with a .023-gauge galvanized steel sheet, and covered by a heavy vinyl print of the playing board which is protected by a satin laminate. Bordered by a 3/4″ x 2 1/2″ birch frame that wraps from the front to the back, the board attaches to a wall with included hardware.

The World’s Largest Scrabble Game is available from Hammacher Schlemmer for $12,000.

I’ve never been a very good Scrabble player. While I have a pretty extensive vocabulary, I think it’s hard to win if you don’t study one of the Scrabble dictionaries that list words that don’t really sound or seem like words anymore. Despite that, I […]

Scrabble fans are going to love these Scrabble Beer Mats. They will keep your tabletop clean and you can also use them to sharpen your Scrabble skills. Plus your guests will love them. You get 54 high quality tile coasters, made from recycled pulp board. […]

If you are a Scrabble fan, then you probably wish you could have the World’s Largest Scrabble Game. Even if you do manage to get your hands on that, you are still going to need something to hold you over during those long commutes to […]

Are you a logophile (lover of words) that turns your nose up at Scrabble because there’s no challenge there? Gird your loins for the ultimate word battle because the Deluxe Edition Super Scrabble is here to put your talent to the test. While the traditional […]

Get your game off the table and onto the wall with this Scrabble Message Board Game. It’s a whole new way to play the classic game. This new version of the games uses magnetic tiles and tile racks to keep it all in place and […]

The Hobbit Scrabble Board Game

You haven’t played Scrabble until you’ve played the Middle Earth version. The Hobbit Scrabble Board Game will become your precious as soon as you start playing. This one board game will rule them all. This game celebrates Peter Jackson’s The Hobbit: An Unexpected Journey. Players […]

If you are a fan of Scrabble with a sweet tooth, this chocolate scrabble game is perfect for you. Although I don’t think it will last long since it will be delicious and features chocolate letter tiles, made from the finest Belgian chocolate. A triple […]

Have your board game and your coffee in one handy package. The Coffee Time Games Scrabble Scramble Board Game is perfect for travel. It’s a Scrabble board game in a coffee cup, with a clear dome design that displays the game pieces. Just don’t confuse […]