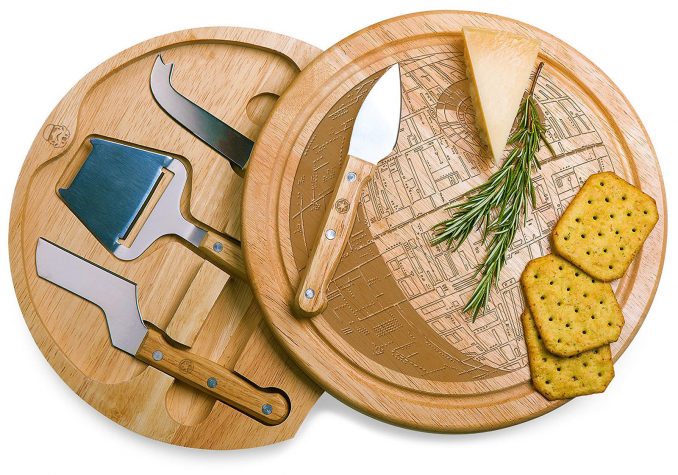 Serve up snacks fine enough for the emperor himself with the Death Star Cheeseboard Set. It may look like a small moon, but the detailed rendering on this split-level cheeseboard is actually the DS-1 Orbital Battle Station, also known as the Death Star.

Made from eco-friendly rubberwood, this Death Star cheeseboard set is officially licensed Star Wars merchandise. It swivels open to reveal a set of four stainless steel cheese tools including a cleaver, planer, fork-tipped cheese knife, and a hard cheese spreader.

This Death Star Cheeseboard Set is $44.95 at Shop Disney. This isn’t the only geeky option when it comes to cheese boards–check out these innovative options: Stormtrooper, Star Trek Enterprise, and Medieval Cheese Board.

If you’re planning on throwing a party for Star Wars Day, this Original Stormtrooper Cheeseboard Set would be wonderful for entertaining. It’s a impressive alternative to that awesome Star Trek Enterprise Cheeseboard Set for people that are more star warriors than trekkies. Using responsibly sourced […]

Sliced cheese is so essential for BBQ season that it deserves to be contained in a special box that looks like a black and white cow. Do your cheese slices a favor and put them in the Moo Cheese Singles Pod. This pod is great for […]

With March Madness going on I’m sure many of you are having some pretty fun parties…And what’s a party without chips and dip? If you are looking for a creative way to house some serious nacho sauce or maybe a spicy salsa, the Cheeseburger Dip […]

Here is a tool for the drifter/adventurer who wants to always be ready to dine at a moments notice. The Hobo Knife Fork/Knife Combo Tool is a nice update to an old classic. It gives you a fork and knife in one tool. It features […]

Whether you are a horror fan or just want to make a statement with your purse, this Bloody Cleaver Handbag should be the one for you either way. It looks just like a bloody cleaver that has been used thoroughly by a maniac. It is […]