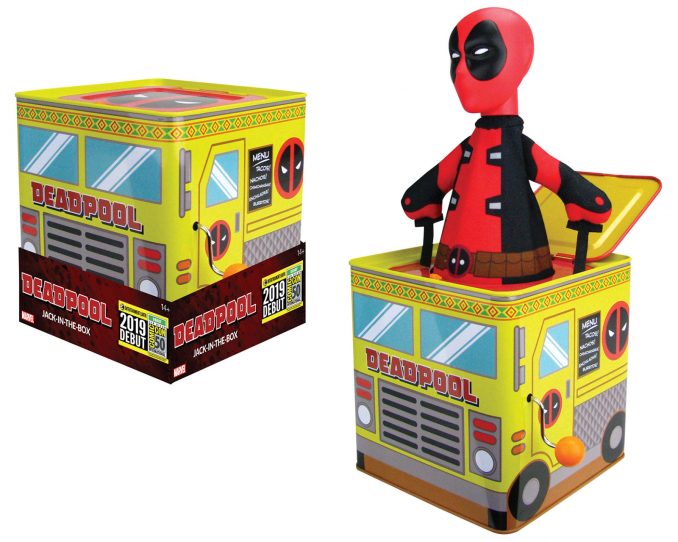 Like an old fashioned jack-in-the-box, this one plays “Pop! Goes the Weasel” as you turn the crank on the side. However, it is the Merc with a Mouth that pops out, and the box he jumps out of looks like a taco truck. It is a limited edition of just 2,394 individually numbered pieces.

The Merc with a Mouth jumps right out at you after “Pop! Goes the Weasel” plays when you turn the crank on this insanely colorful Deadpool Jack-in-the-Box – Convention Exclusive from Entertainment Earth. With a detailed plastic head and a fabric body, the classically styled Deadpool figure showcases the wisecracking anti-hero with katanas in his trademark red outfit, packed inside a retro tin jack-in-the-box that looks like a taco truck (of course)! The box features Deadpool’s name, logo, and a menu that advertises tacos, nachos, chimichangas, enchiladas, and burritos. It’s a cube that measures about 5 1/2-inches on each side.This limited edition of only 2,394 pieces comes individually numbered with a holographic sticker.

You can pre-order this Deadpool Jack-in-the-Box for $29.99 exclusively from Entertainment Earth. However, it is an Entertainment Earth Convention Exclusive, and as such will go on sale first at San Diego Comic-Con 2019. If supplies remain after the convention, they will be shipped to online customers in August 2019.

If you like Deadpool, taco trucks, and tacos, check out the Deadpool Taco Truck Taco Holder.

Beep beep. Make way for the Taco Truck Taco Holder. It’s the best kind of truck because it delivers fresh tacos. Forget the Ice Cream Truck, this truck is filled with delicious crunchy tacos. This is a great way to serve and display your tacos […]

You may not have a chimichanga truck at your work where you can buy lunch, so you’ll just have to bring your chimichangas in with this Deadpool Chimichanga Truck Metal Lunch Box. It also works great for storing pencils, pens, and other odds and ends. […]

The Merc with a Mouth brings on the adjectives (and the tacos) with the Deadpool Taco Pajama Pants. If you love Marvel’s Deadpool and strongly believe tacos are so great that special pants should be required when eating them then these 100% cotton pajama pants […]