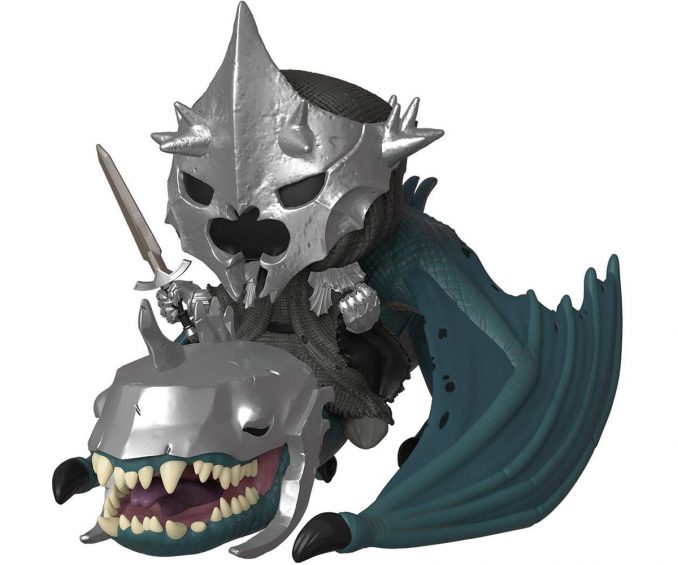 This Funko Pop! Rides LOTR Witch King on Fellbeast would look great with your Lord of the Rings collectibles. It features the Witch-king of Angmar (aka the Lord of the Nazgûl) holding a sword and riding a fellbeast, the large flying creatures that the Nazgûl rode on.

It is Funko Pop! Rides #63. Since it is part of the Rides collection, it is larger than a typical Pop! with the Witch King standing about 5 inches tall and the fellbeast measuring about 8.25 inches by 4.25 inches.

He reeks evil! The terrifying Witch-king of Angmar is mounted on Fellbeast, terrorizing all of Middle Earth. Reimagined as stylized Funko Pop! figures, they’re not quite as intimidating, but still cool nonetheless. If you’re a Lord of the Rings fan, this is a must for your collection!

This Funko Pop! Rides Bob’s Burgers Espresso Trip Tina & Unicorn is an awesome tribute to the dreamy trip Tina had when she tried espresso in Season 3 Episode 23. Watch the clip below and at the 1:05 mark you see the inspiration for this […]

Lord Of The Rings Map Of Middle Earth Poster

That Game of Thrones World Map was pretty incredible, wasn’t it? But if you like J. R. R. Tolkien even more than George R.R. Martin, you’ll really love this Lord Of The Rings Map Of Middle Earth Poster. Follow Frodo’s Journey to Mordor through this […]