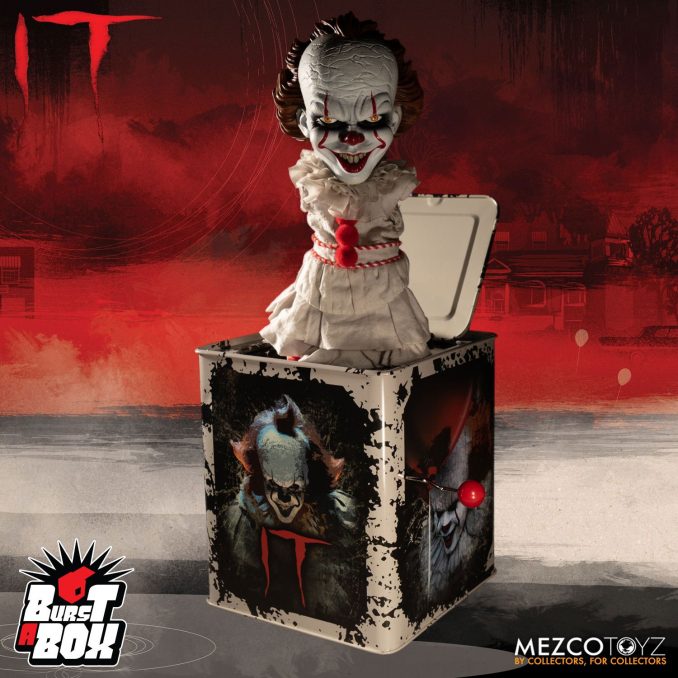 Originally jack-in-the-box toys weren’t creepy, even though their action was basically a jump scare. Now horror movies have made them scary, just as they’ve associated nursery rhymes with sadness and creepiness. Mezco Toyz takes it to a whole new level with this new It Pennywise Burst a Box Jack-in-the-Box, a truly scary toy and awesome collectible.

Just like a traditional jack-in-the-box, this It Pennywise Burst a Box is a tin music box with a crank on the side. Keep turning it until Pennywise pops out with his menacing grin and signature clown suit. When popped it is about 14″ tall. It comes packaged perfect for collectors, because it is popped-out and visible through the window box, ready for display without opening the package.

From the 2017 film IT comes the It Pennywise Burst a Box Jack-in-the-Box! This fully functioning jack-in-the-box is approximately 14-inches tall when “popped”, throwing the red balloon-toting, demonic clown that terrorizes the children of Derry right in your face. Featuring a detailed head sculpt and a clothed spring body, Pennywise features a menacing grin and sports his signature clown suit, all encased in a tin music box.

Burst-A-Box: IT (2017) – Pennywise comes packaged popped-out of his tin and perfect for display in a collector-friendly window box.

It Pennywise Burst a Box is coming in July 2019, but you can pre-order it now from Entertainment Earth and Mezco Toyz.

While that Pennywise Jack-in-the-Box is definitely one of the coolest and scariest out there, this Deadpool Jack-in-the-Box is pretty awesome too. Like an old fashioned jack-in-the-box, this one plays “Pop! Goes the Weasel” as you turn the crank on the side. However, it is the […]

While many people collect Funko Pop! Figures these days, some prefer figures that they have to build first, such as sets like this LEGO BrickHeadz Jack Skellington & Sally. It joins other two character sets in the LEGO Brickheadz line such as the Homer Simpson […]