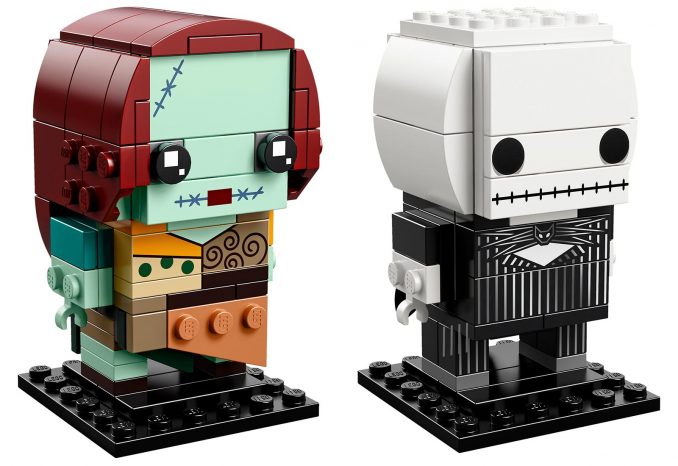 While many people collect Funko Pop! Figures these days, some prefer figures that they have to build first, such as sets like this LEGO BrickHeadz Jack Skellington & Sally. It joins other two character sets in the LEGO Brickheadz line such as the Homer Simpson & Krusty the Clown, Mr. & Mrs. Claus, and Newt Scamander & Gellert Grindelwald sets.

The Nightmare Before Christmas Jack Skellington & Sally is LEGO Brickheadz #41630 and is comprised of 193 pieces. They are easy to put together, making them a nice set for kids’ stocking stuffers.

These LEGO BrickHeadz construction characters featuring Jack Skellington & Sally are fun to build using LEGO bricks that recreate all their iconic details, including Jack’s frightful smile and black pin-striped suit, plus Sally’s decorated eyes and scruffy rag doll look. They also stand on buildable collector’s baseplates with BrickHeadz logo for easy display in your home, office or anywhere you like.

Buy the Jack Skellington & Sally BrickHeadz for $19.99 at LEGO Shop.

If you like Jack Skellington designs, also check out the Luggage, Teapot, Christmas Ornaments, Coffin Cutting Board, Slippers, and Pet Throw Blanket.

LEGO BrickHeadz are similar to Funko Pop figures, except that you build them from LEGO pieces. They’re also like Funko Vynl, because most of the newer sets come with a pair of related characters. That’s true for this LEGO BrickHeadz Homer Simpson & Krusty the […]

Jack Skellington’s face has been pictured on everything from Slippers, Ornaments, and Pez Dispensers, to Teapots, Lamps, and Handbags. Yet if you want to wake up to his smiling face each morning, you’re probably best off with this Funko Pop! Home Jack Skellington Mug. It’s […]