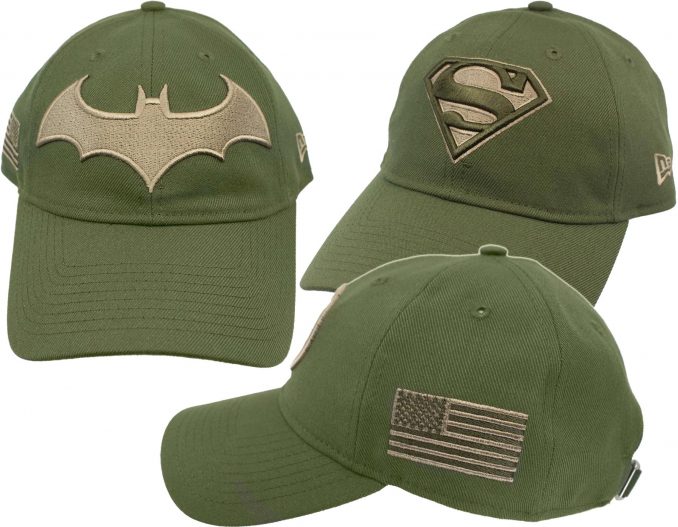 If Batman, Superman, or Wonder Woman is your superhero of choice, one of these DC Comics Salute to Service 9Twenty Adjustable Hats might just be the perfect headwear. Like the similar Marvel Salute to Service Hats, these hats allow you to display the insignia of your favorite comic book hero, with a military-inspired design that shows your patriotism.

Plus, right now, as part of their Black Friday Deals Countdown, SuperHeroStuff (the exclusive outlet for these adjustable caps) has these on sale for up to 30% off! You have a choice between Superman, Batman, or Wonder Woman, with each of them featuring an American flag on the side and camouflage under the brim. Each is a New Era 9Twenty Adjustable Hat with a comfortable, relaxed fit.

After Batman comes home from a long night of wearing a latex mask for hours, his hair is quite the sight. That’s why the first thing he does when he comes up from the Batcave is to grab his Salute to Service hat.

Bruce wanted to show his support of the troops defending our nation day in day out, so he teamed up with New Era and created this hat. Coming in Army green, this hat features the Batman Hush logo on the front with the American flag on the right side. Staying out of harm’s way is the 9Twenty sticker, safe under a camouflage brim. It’s become his favorite over the years so he decided to make more. Now you can show your support of our troops with your own Batman hat.

This Batman Hush Salute to Service 9Twenty Adjustable Hat is a SuperHeroStuff exclusive and it costs $27.99.

Superman wanted to show his support of all the servicemen and women who are protecting our nation, so he teamed up with New Era to construct a hat that’s not only patriotic but also comfy.

Coming in army green, this 9Twenty relaxed fit baseball cap features the Superman S logo on the front with an American flag on the side. This hat comes with the 9Twenty sticker under a camouflage curved brim. Show your support of our brave troops today.

Buy this exclusive Superman Salute to Service 9Twenty Adjustable Hat for $27.99 at SuperHeroStuff.

Wonder Woman is no stranger to the price that is paid to keep a nation safe. She is the protector of her home just like the brave service men and women who protect our home every day.

Now you can show your support of both the troops and this lasso-wielding warrior with this awesome Wonder Woman Salute to Service adjustable hat from New Era. Coming in army green with Wonder Woman’s signature Ws on the front, this hat features an American flag on the right side as well as a 9Twenty sticker under a curved camouflage brim.

Yesterday was Veteran’s Day, a time to honor military veterans, and it would’ve also been a good opportunity to wear one of these Marvel Salute to Service 9Twenty Adjustable Hats. Whether you’re a vet or you simply want to show your support to the men […]

This Support the Troops Stormtrooper T-Shirt reminds us just how much fun it is to think of Star Wars themes as they relate to real life. Although we don’t hear much about supporting the troops the last few years–probably because we don’t see war protests […]

This Star Wars Collectible Mini Hat Collection is a limited edition collectible with only 170 individually numbered pieces. Packaged in a massive 32″ x 18.25″ blister pack that mimics action figure packaging, you can maintain this collection in mint-in-box status while still having it on […]