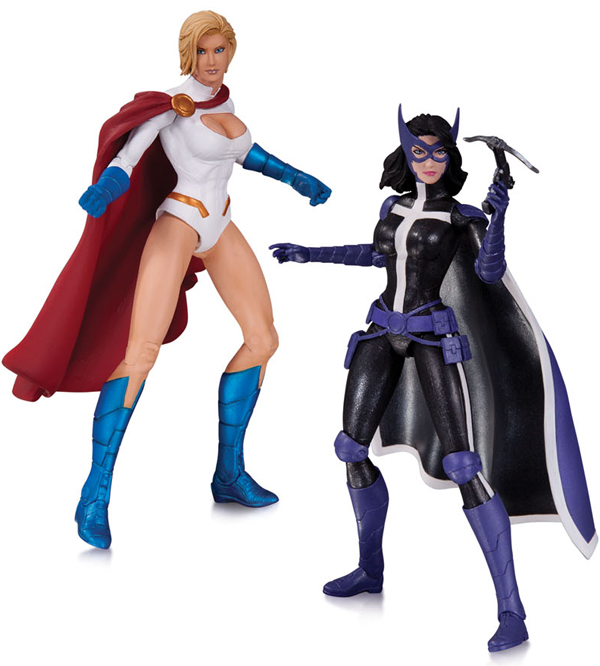 The DC Universe is busting at the seams with heroes but almost all of them are packing some serious testosterone. The DC Comics Power Girl and Huntress Action Figure 2-Pack proves there are a few women that are capable of dealing with the bad guys.

In the old days (a few years ago), when you thought of female superheroes in the DCU, you thought of Wonder Woman, Batgirl, and… ummm… Hmmm. Yeah. Kinda empty on the ladies side of the room. Sure, there are a few minor-league characters like Zatanna and Stargirl but heavy-hitters have been few and far between. However, the introduction of the New 52 and Earth 2 brought us two very strong female leads in the form of Power Girl and Huntress.

Both figures stand 6 3/4-inches tall and come in a blister card packaging. Now we just need another 2-figure pack that features the ladies in their Earth 2 incarnations of Supergirl and Robin.

The DC Comics Power Girl and Huntress Action Figure 2-Pack will be available July 2014 but it can be pre-ordered now for $39.99 at Entertainment Earth.

Kara Zor-L strikes an intimidating pose with the DC Comics Cover Girls Power Girl Statue, as she fights for truth, justice, and the understanding of her terribly convoluted comic book history. Ah, poor Kara. The comics haven’t been kind to her, so let’s break it […]

It looks like Michonne is living up to her title with The Walking Dead Huntress T-Shirt as she stands triumphantly over her latest prey. The shirt features Michonne in the woods with her two zombie pets standing over a Walker that has quite literally lost […]

Helena Bertinelli or Helena Wayne? The Huntress Premium Format Figure can be either one, or maybe both at once, although that would be weird. Whether you envision her as the dark hunter of the mob or as the daughter of Batman and Catwoman, this 23-inch-tall […]

The Supergirl of Earth-2 is once again a major player after the New 52 reboot, and the Power Girl Premium Format Figure is the perfect statue for fans of the popular DC Comics character. Poor Power Girl has had a rough go in the comics, always […]

This DC Comics Girl Power Wall Clock celebrates the female heroes of the DC Comics universe. Specifically the big 3. Supergirl, Wonder Woman and Batgirl. Keep time with the ladies of DC Comics. You will always be on time with these lovely ladies to guide […]

Celebrate the female half of DC Comics with this DC Comics Girl Power Hardcover Journal. That cover packs a punch featuring Wonder Woman, Batgirl, and Supergirl with the words, “Girl Power,” above. It’s perfect for the DC fangirl or the guy who just appreciates well […]

It’s about to get super under the big top with the DC Comics Bombshells Power Girl and Superman Statue, featuring the Kryptonian cousins of power. Power Girl gets her turn with the retro pinup-style that has made the DC Bombshells so popular, and for the […]

Fans of the cleavage-baring alternate Supergirl of Earth-2 will love this Power Girl Premium Art Print by the talented Stanley ‘Artgerm’ Lau. Forced to give up her Supergirl persona when she discovered the name was already taken, Earth-2’s Kara Zor-L became Power Girl, a Kryptonian […]

Almost everything you use for work or for your other day-to-day chores and activities require electricity. Sometimes, the jumble of wires and plugs you’ve got plugged into your outlets can be a hot mess. I have one of those long, horizontal power strips that sometimes […]